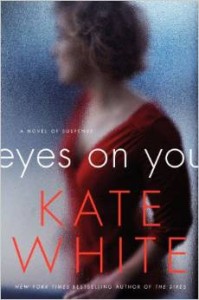 Robin Trainer has everything going for her. After her divorce and downward spiral, she is back on tv, cohosting a hit nightly show that is taking off much faster than anyone expected and her book is being released to great acclaim. Of course, this is when things start to go wrong in Eyes on You by Kate White.

At first, it’s a threatening note in her purse at a cocktail party for her book launch, something that makes her angry but that she dismisses. When she discovers 3 of her newly released books knocked off the bookshelf in her office, all with the face ripped in various places, she shrugs and assumes the cleaning lady accidentally knocked them off. When she hears footsteps but sees no one behind her on her way home late at night – by page 51, mind you – she assumes she’s just being paranoid. Of course she isn’t, yet she continues to brush off her issues as unrelated.

Her apparently lack of intelligence, despite her successful career, in terms of how one would deal with all these issues drove me batty. I get that tv is all about image, but she should never have ripped up that first note and assumed that because it happened at her book launch party, it wasn’t something she should discuss with security at the cable network, even after the book jackets were ruined. She annoyed me, and it was made only worse by a statement at the end of chapter 2: “I hated things with stains on them. They made me think of my stepmother. So anything with a stain had to be destroyed.” It made her a fairly unlikeable main character in my eyes.

That said, it is a fairly light read for a thriller. Yes, things are going wrong at the office and someone is apparently targeting her, with incidents escalating. There is no shortage of suspects from the crazy Vicky who hosts another show on the same network to her cohost Carter to her second cousin Maddy who is her ineffective intern to Charlotte, a producer who isn’t pulling her weight. The plot moves quickly, and there are plenty of twists and turns to keep you off the true scent.

So much of it was fairly trite, with those twists and turns there just for the impact of throwing the reader off the scent, but going into it with the right mindset of an easy read and no expectations for great literature turns it into something not memorable but worth finishing, perfect for curling up during a bad thunderstorm where you need to keep your distracted mind off the looming storm.

Written by 5 Minutes for Books contributor Michelle who would never survive in the television world. See the world she has created on her blog Honest & Truly! and follow along with her on Twitter where she is also @HonestAndTruly.

« All You Need Is Less
All Fall Down by Jennifer Weiner »