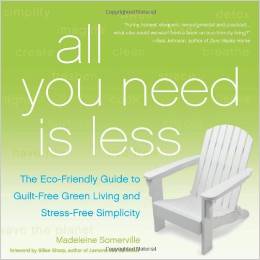 We moved last fall, and a big piece of getting ready to move was purging a lot. We’re choosing to live in a smaller space, and it’s amazing how easy it is to live with less (especially since it’s temporary housing still and much of my stuff is still in storage). While I miss things sometimes, I’m shocked by how often I don’t miss things I used all the time. I was excited to read All You Need Is Less: The Eco-Friendly Guide to Guilt-Free Green Living and Stress-Free Simplicity by Madeleine Somerville.

I’ll fully admit that I’m somewhat of a greenie, though not nearly as crunchy granola as I dream of being. I line dry all my clothes, but I don’t compost. This book appealed to me on so many levels, and I couldn’t wait to dig in – guilt free green? And stress free simplicity? In one book? I was sold.

Madeleine Somerville is definitely more crunchy granola than I am, but she’s married to man who reminds me vaguely of my husband – not always so supportive of her efforts. My own husband refused to assist me in assembling a compost bin, and he flat out refused to have compost in the house. The fact that Madeleine has the same sort of struggles and issues means that she gets the humor in going maybe a little too far out there, as well as the reality that many of us face that we cannot do everything, and in fact, we may not want to do everything.

Her book is filled with humor, though some of it was almost a little too cutesy and conversational at times. That didn’t detract from her message at all, however, and I loved the way she had her book set up. She has logical chapters like home, beauty, gardening, and more, and each is divided into subsets that lead you down a path, each of which includes how to make some of the green items she’s talking about.

Many of these I was familiar with already, but I loved many of her tips from the “homemade” shampoo and conditioner – something I plan to try once I finish my own bottles, an area I’ve been vowing to explore for awhile – to natural mosquito bite remedies. And yes, living in Chicago, we’ve already put them to the test, and I was shocked by the fact that the banana peel cure truly works.

There are so many ways to be green that there is no way to cover them all. That said, I was somewhat surprised that in all she talked about with a baby (cloth diapers, of course, but so much more), she didn’t mention making your own baby food. That was something I did that was so incredibly easy – partly because it was easy, but also because it was so much cheaper and I wanted to know what my kids were eating. That just goes to show you how many choices there are when it comes to being green or living with less.

The book was definitely more focused on green living than on living with less. There weren’t as many discussions about doing without as I had expected there would be, but I absolutely adored some of the suggestions from my favorite of using the Facebook buy/sell/trade groups to get rid of (and find!) items to more sharing amongst friends and neighbors. So many of us aren’t close to our friends and neighbors as we used to be, but it makes so much sense.

Why do we all have our own lawn mowers when we could share? Why do we each have a huge set of party platters when we could borrow them when we need them? If we could instead share some of these items and trust that they’d be returned to us in good condition, how awesome would that be? I do this to some degree with friends where we borrow jewelry or purses sometimes, but this could be expanded to so many other areas, too. Movies, books, kids toys, games, snow blowers, etc. But convincing everyone else becomes the challenge, but one I think I’m up to after reading this book.

So often when you hear people talk about being green or going green, there is such a preachy tone to it, but Madeleine avoids this entirely. She has different options and readily acknowledges that making different choices is ok and is going to happen. I came away from this book with so many ideas, and this is one that I’m going to keep front and center in my bookshelf, knowing that I’ll be returning to it frequently to look up recipes or get ideas on how to do something again and again.

Written by Michelle who loves being green, though she wishes she were more so. See how she helps reduce waste by cooking her own food instead of buying prepacked items and enjoy the recipes she shares on her blog Honest & Truly! and follow along with her on Twitter where she is also @HonestAndTruly.

« The Accidental Bookclub
Eyes on You »