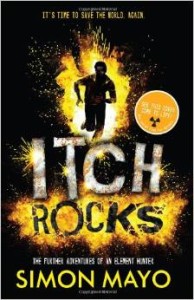 Itchingham Lofte does not fit in at his new Cornish school. He had promised himself he was going to make more of an effort this school year, but in Itch Rocks by Simon Mayo, he is now the most protected kid in the world, and his bodyguards scare away everyone, not giving him much of a chance. Add to the fact that he’s still an element hunter, and he remains as much of an outcast as he did in Itch, aside from his (female) cousin Jack and sister Chloe.

Itch Rocks picks up after Itch has been released from the hospital after suffering severe radiation poisoning in the first book trying to protect the new radioactive element he accidentally found and keep it from the bad guys at Greencorps who were after it. Dr. Flowerdew appears to be dead, so far as everyone knows and the rocks are safe. Only Itch knows where they are hidden, but the rumor of their existence – instant nuclear power to any country, clean energy, terrorist bomb in your pocket – means there are plenty of people who are still after them and will stop at nothing to get Itch to tell them where they’re located.

This book is one that my 10 year old wants to read. He’s fascinated by the cover and the details of the periodic table of elements there. We’ve had some great conversations around them, but he’s not quite old enough for some of the material in the books. This isn’t a science fiction type book where you can push out the fiction of what happens. There is enough realism in them to make me want to wait until he’s a little older before exposing him to the graphic description of radiation poisoning, the two books in this series would be a great read for a middle school or high school student.

While the books are definitely related, you do not have to have read Itch before picking up Itch Rocks. There is enough background information given in the sequel to keep a reader from being completely lost, and the stories are separate. That said, it would be helpful to read the first book, and I would recommend doing so.

Personally, I enjoyed the first book more than the second one. In the first book, Itch, his sister, and his cousin actively control their destiny. They are the ones doing and deciding throughout the book. In the first half or so of Itch Rocks, it is more than things are happening to the trio instead of the other way around. Once that dynamic changed in the second book, I settled back into enjoying Mayo’s creation thoroughly.

I personally love the character of Itch. He has found his passion, and he runs with it. Collecting elements is definitely odd, but he learns from each one, and he is creative with how he collects them, as well as how he uses many of them in the book. He has issues outside of just not quite fitting in at school, and his interactions with his mom make me smile – especially as I can see myself in that exact role with my own son.

In each of the two books so far, a little more has been revealed about the characters and a larger plot that continues to develop. I like that not everything is tossed out there upfront, as it keeps the suspense and tension in the book alive. Mayo times the release of his information well, and it’s clear by the end of Itch Rocks that there is at least one more book yet to come in this series – and I’ll be on the lookout for it once it is published.

Written by Michelle who can only hope that her son doesn’t blow off his eyebrows or discover a radioactive element as he grows older. He provides enough of a challenge as it is. See what he’s up to on her blog Honest & Truly! and follow along with her on Twitter where she is also @HonestAndTruly.