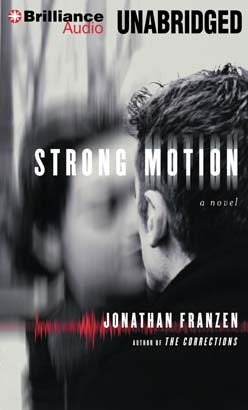 I like Jonathan Franzen. I’m not sure why, since it seems that one of his goals is to question and debunk principles that I hold dear, such as big business, family, purpose, goodness, and religion. But maybe that’s why. He addresses issues of our day, and the opinions he has and the characters he paints definitely reflect our society. His long-awaited novel Freedom captivated me (click through to read my review), so when Strong Motion came out in audiobook recently, I knew I wanted to try it out. It was first published in 1992, so it now reads like a bit of historical fiction, twenty years in the past. The 90’s setting was interesting, and yet the big business topic felt familiar and current.

His novels are not about plot, at least not for me, but about character. As with my other experience with Franzen, the characters are not exceedingly likable. They are mostly flawed, but also immensely earnest. They either embrace their weaknesses or are trying to overcome them.

For readers who like to know about plot, here’s an excerpt from the product page:

Louis Holland arrives in Boston in a spring of ecological upheaval (a rash of earthquakes on the North Shore) and odd luck: the first one kills his grandmother. Louis tries to maintain his independence, but falls in love with a Harvard seismologist whose discoveries about the earthquakes’ cause complicate everything.

There are heavy issues here, as mentioned in this other product description I found from the hardcover book: A suspenseful, complex novel dealing with the issues of our day–environmental pollution, religious fundamentalism, abortion, and the threat of apocalypse. It is also a tender and fresh love story–a story of betrayal and redemption. If novels written in the social commentary style are not your thing, then you should avoid Franzen’s novels, but if you’re curious or like these kinds of novels, I can recommend this one.

I think that I particularly enjoyed this on audiobook, because long books with a quieter style (and digressions from the POV of a raccoon) sometimes result in me losing interest. I was so invested in the characters and curious about them that I honestly didn’t even care about the actual resolution of the who’s, what’s, and why’s of the earthquakes, but the loose ends were tied up nicely.

The narrator of this audiobook reminded me of the narrator of the Freedom audiobook, enough that I clarified that they were not the same. In the end, I decided that it was more the tone than the actual voice. Then it caused me to wonder if condescension is necessary to voice the tone that Franzen uses.

I enjoyed this one well enough, though if you are looking for a Franzen audiobook to enjoy, Freedom still stands out to me years later as an outstanding work, both the novel and the audiobook.

Listen to an excerpt at the Brilliance Audiobook page.