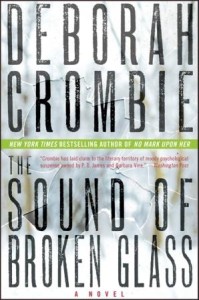 In The Sound of Broken Glass by Deborah Crombie, Detective Inspector Gemma James is back in another book in the latest installment in the Duncan Kincaid and Gemma James mysteries. I’ve read previous books, but I picked up the last book in the series – No Mark Upon Her – having never heard of the series and had no issues being swept into the murder mystery involving the husband and wife police officers.

I adore that the book is more than just the current mystery but also involves aspects of Kincaid and James’ lives that move forward in time rather than being stuck in a virtual vacuum. Their newly adopted daughter Charlotte, who was part of a previous book’s investigation, is having difficulties adjusting to a daycare or preschool routine, so Kincaid has had to extend his leave from the Scotland Yard to stay home with her while she gets more comfortable with her new(ish) situation. A good part of the book involves finding solutions for Charlotte so Kincaid can return to work, and there are of course coincidences that tie this to the murders that James is investigating.

James and her team that includes Melody Talbot, a mainstay in the series, and Shara MacNichols have been called to a brutal murder scene where a prominent barrister has been tied up and strangled in a seedy hotel where he apparently brought women he picked up from his local bar most Fridays.

As the investigation continues, unhappy coincidences begin to rear their heads. A guitar player who is about to sign a major record deal had an argument in that bar with the dead barrister the night he was murdered. Another, seemingly unrelated, barrister is murdered just two nights later in an almost identical scene. Connections start to appear between witnesses and friends of Kincaid and James, among others.

The pace of the book is gripping, and it’s one where I kept waiting for free time to read so that I could pick it up to see what the next twist or turn might be. The book alternates between the present with the investigation and domestic situation and flashbacks to scenes from the 1970s with Andy Monahan where he is a 13 year old growing up in the projects with an alcoholic mother who neglects him and a young widow who moves in next door with whom he develops an unlikely friendship, as well as the two rich boys who find and torment Andy.

The characters are richly drawn with unique personalities. I can see the frustration and fear from Andy and the confusion and shame Melody Talbot experiences. I smile at the fatherly protectiveness of Tam for a variety of characters in the book, as he is one of the coincidental characters who is friends or works with many in the book.

While the book focuses on DI James and her investigation, Kincaid is still a part of the book and helps unofficially with the investigation, along with Doug Cullen who works with Kincaid but is on medical leave after breaking his ankle. In other books, the focus is on investigations Kincaid is leading, as the husband and wife (no longer) work for the same department.

I enjoy the fact that this book offers a piece of home that to me makes the characters and their lives richer and helps create a world for them outside just the mysteries they solve. That said, I know there are many who simply want the mystery and nothing outside it, and this series has definitely taken a leap to more plot outside the official mystery, and this series is likely to be less appealing to those people.

Me? I’m just looking forward to the next novel in this series, To Dwell in Darkness, which will be released this fall.

Find out more about the book and the author at the TLC book tours page.

Written by Michelle who is grateful to have no drama or mysteries in her life. That doesn’t mean she lives an empty life, however, as you can see on her blog Honest & Truly! or when you follow along with her on Twitter where she is also @HonestAndTruly.

« Outside the Lines
The Secret Tree »