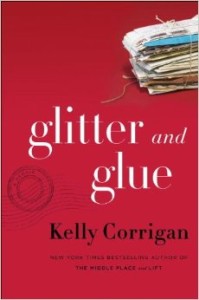 Kelly’s first experience with motherhood was when she worked as a nanny for two young kids who had recently lost their mother. Kelly was trying to figure out who she was going to be, post-college in her “see the world” experiment. She wound up broke in Australia, necessitating the job. Being a mother figure, even at such a young age, she found herself thinking about her own mother.

There are a few flashes — mostly bookended at the beginning and end — of her own current life as a mother as she recognizes the need for her own mother.

Corrigan is an honest, funny, and fluid writer. Reading this book made me pick up Lift, which I had missed and caused me to be in a situation where I am reading nine books at one time. I also want to go back and read The Middle Place, her first memoir, which I enjoyed immensely.

« Etched on Me {with #Giveaway}
Twisted Sisters by Jen Lancaster »