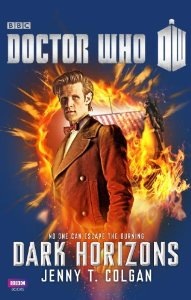 Any Who-vians out there? Is that what you call yourselves? My 15-year-old daughter got hooked on The Doctor a year or so ago. When I was offered a chance to participate in the Dark Horizons blog tour, I was sure she’d love it, and I thought that I might like to get a taste of one of her favorite new hobbies obsessions.

I actually was not able to read any of Doctor Who: Dark Horizons. My daughter did read most of it. She liked it okay, but she said that she liked watching it more than reading about it. That said, she appreciated it. I also think she might be more open to return to it in the future, because she (unlike many others) likes Matt Smith as the 11th doctor, and there won’t be any new episodes starring him.

Even though this isn’t a full review, which we usually run, I did want to pass on information about this book to others who might be interested.

“Now, you may or may not have noticed, but we appear to be on fire…”

On a windswept northern shore, at the very tip of what will one day become Scotland, the islanders believe the worst they have to fear is a Viking attack. Then the burning comes. They cannot run from it. Water will not stop it. It consumes everything in its path – yet the burned still speak.

The Doctor is just looking for a game on the famous Lewis chess set. Instead he encounters a people under attack from a power they cannot possibly understand. They have no weapons, no strategy and no protection against a fire sent to engulf them all.

Add in some marauding Vikings with very bad timing, a kidnapped princess with a secret of her own and a TARDIS that seems to have developed an inexplicable fear of water, and they all have a battle on their hands. The islanders must take on a ruthless alien force in a world without technology; without communications; without tea that isn’t made out of bark. Still at least they have the Doctor on their side… Don’t they?

I loved reading a bit about the author Jenny T. Colgan on the TLC Book Tour page:

A lifelong Doctor Who fan, at the age of 11 she won a UK fan competition to meet the Doctor and was mistaken for a boy by Peter Davison. Her favourite episodes are ‘Silence in the Library’ and ‘Warriors’ Gate’.

Are you a fan? What’s your favorite episode? My daughter likes “Vincent and the Doctor,” which I actually watched with her and enjoyed as well.