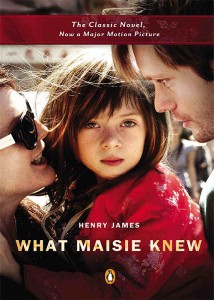 Way back in 1897, prolific writer Henry James’ novel What Maisie Knew was published. Reading it 116 years later, I was surprised that the story fit into that time period, and my images of an “old-fashioned” society were a bit shattered as a story of a contentious marital break-up and subsequent custody battle unfolded. Sadly, it seems that some behaviors and parental inadequacies have been around for a long, long time. Penguin Books has re-released the classic novel What Maisie Knew this past spring with a movie tie-in cover showing a still image from the modern-day adaptation recently released on DVD.

I should likely preface my take with a disclaimer about my relationship with classic literature. I really want to be the kind of person who frequently reads “the classics” simply because I appreciate quality writing, and stories that have stood up for long periods of time certainly are deserving of my attention. But, I find that I often have difficulty actually getting the reading accomplished because I am so accustomed to a more contemporary writing style. This was somewhat the case for me with What Maisie Knew, for while I was intrigued by the story, the process of reading the text didn’t come as smoothly for me as I would have hoped. That’s not to say that I didn’t like the novel, for I couldn’t help but be enchanted by the title character, a young girl caught in the middle of a despicable set of parents.

Maisie’s trials are only beginning when a judge orders her custody to be shared by her divorced parents, with her living six months with one parent before being traded off to the other for the rest of the calendar year. What follows isn’t exactly what the court judgment had in mind, and Maisie’s well-being is far from the top priority of either parent. This quote from the introduction of the story sums up her parents’ motivations in attempting to keep the other from getting full-custody:

What was clear to any spectator was that the only link binding her to either parent was this lamentable fact of her being a ready vessel for bitterness, a deep little porcelain cup in which biting acids could be mixed. They had wanted her not for any good they could do her, but for the harm they could, with her unconscious aid, do each other.

Sadly, the framework of this century-old story is able to be dropped into a modern-day setting quite easily. In the movie version of What Maisie Knew (linked to the newly released DVD), Julianne Moore portrays Maisie’s mom, and her father is played by Steve Coogan, two well-respected and established actors, while Alexander Skarsgård and Joanna Vanderham play two other roles important to Maisie’s young life. However, the star of this film is, in no uncertain terms, the young actress Onata Aprile, who gives an incredible performance as Maisie, completely embodying her natural innocence and amazing fortitude.

The film version changes many details of the story in bringing it to modern-day, though the essence of the story remains the same. I think it could be argued that Maisie’s film parents actually have more genuine love for her than those in the novel, at least by my perception, though they are equally as enmeshed in a world of selfishness that doesn’t allow for any reasonable amount of thought toward their child’s well-being. This isn’t an easy film to watch, but the performances are absolutely top-notch.

I’d love to hear from others who have read What Maisie Knew, and I highly recommend the film, though with the warning that it will likely trigger intense feelings, especially for parents. Leave a comment and let me know your thoughts.

« This Is Paradise, a 5-Star Read
Instructions for a Heatwave »