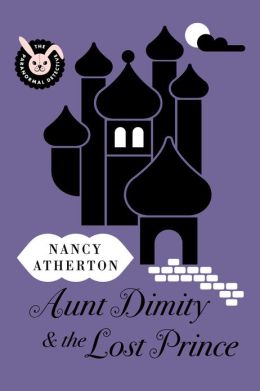 Lori Shepherd is my kind of girl. She opens the book Aunt Dimity and the Lost Prince by Nancy Atherton bemoaning the uselessness of February. I agree with her the T. S. Eliot originally listed February as the cruelest month before finally revising it to April. Lori is a mother of rambunctious six year old twins living in the sleepy village of Finch in England.

It’s February, and her husband is on a business trip to Majorca. A cold snap has closed school for a week, her father-in-law has a cold and can’t receive visitors, and the barn where Rob and Will’s ponies live is closed due to a burst pipe. Needless to say, Lori needs some help to corral and entertain her children. Fortunately, her friend and neighbor Bree Pym shows up as an unexpected houseguest, having painted the inside of her house without realizing the need for ventilation – which she can’t do due to the cold snap.

Bree is an instant hit with the boys, and she’s a huge help to Lori. When she suggests they visit Skeaping Manor, everyone leaps at the suggestion. Skeaping Manor is a museum known for its creepy artifacts like the wepa (essentially an overgrown cockroach from what I gather) to skulls and other collectibles. Lori asks the director if there is anything less icky, and he gratefully directs her to the second floor where there are collections of porcelain, jade, silver, and more.

As she inspects the exhibit, she runs into Daisy Pickering, a small child who spins a fantastic tale about a silver salt cellar in the exhibit. Daisy’s mother is the cleaning lady for the museum and whisks her away shortly after they begin their conversation, but Daisy’s coat turns up at the thrift shop where Lori volunteers in a bag of donations. When Lori checks the pockets, she finds the silver sleigh, and a mystery is born.

Why does Daisy have the sleigh? And why was her coat and other clothing donated? Bree and Lori set out to solve the mystery, trying to track down the mysterious Pickerings who have disappeared – not showing up to the daily cleaning jobs Amanda Pickering holds and abandoning the lease on the apartment they share. That doesn’t deter Lori or Bree, and they uncover all sorts of interesting characters in their quest to solve the mystery.

The book also has a more unique aspect to it. It is a paranormal mystery, where Lori communicates with her mother’s (dead) best friend via a journal. Lori’s house is a bequest from that friend, and when Lori speaks to the journal, handwriting appears in answer. Aunt Dimity is Lori’s sounding board, and she’s a sweet lady who has some moxie that makes me smile. That was a surprise to me in the book, but it shouldn’t have been.

Aunt Dimity and the Lost Prince is actually a part of the Aunt Dimity series – of which there are now eighteen books. The fact that I didn’t realize this until after having finished the book attests to how easily you can pick up any book in the series and read it without feeling lost or that too much is given away to read earlier books.

Nancy Atherton has created a book that is a light and entertaining read. It’s a bit absurd at times, but it’s meant to be. It’s a fun book, meant to be nothing more. The characters are well meaning and sweet, and of course the mystery is solved in the end, but not at all how you would expect. This is one where I’ll definitely go investigate the remainder of the series, starting with the first book Aunt Dimity’s Death.

We have a copy of Aunt Dimity and the Lost Prince to give to one of you (U.S. only). Just leave a comment if you’d like to win, and we’ll announce the winner in our June 5 giveaway column. The giveaway is closed.

Written by Michelle who wishes she had a sounding board in a journal who could provide advice when needed. Of course, she rarely has enough quiet in her life where she could sneak away to use it without anyone suspecting she were off her rocker. See what’s keeping her busy by reading her blog Honest & Truly! or following along with her on Twitter where she is also @HonestAndTruly.

« The Last Camellia
I am a Church Member, a 5-Star Read »