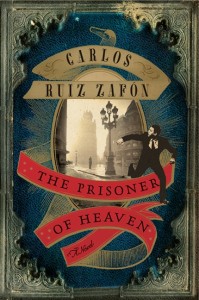 It took me a long time to get into The Prisoner of Heaven by Carlos Ruiz Zafón. That wasn’t so much – I don’t think – because it wasn’t the first book in a series of novels that includes two other books. Prior to the start of the book, there is a introduction assuring the reader that though The Prisoner of Heaven isn’t the first in the cycle of books set in “the literary universe of the Cemetery of Forgotten Books” and that they can be read in any order.

That said, I was confused for much of the book, and I didn’t begin to embrace the characters within the book until midway through the book when Fermin began to tell Daniel – ostensibly the protagonist – about his history. Daniel Sempere is the son in the bookstore Sempere & Sons. It is 1957 in fascist Barcelona where Franco rules. The bookstore isn’t doing well, and Fermin is the other employee outside the family.

Fermin should be excited  about his upcoming wedding to Bernarda, but he appears miserable, as much as he loves her. Daniel can get nothing from him, and after Fermin has scuttled away and the older Sempere has set out on an errand, a mysterious man comes into the bookstore asking after Fermin. When told that Fermin isn’t there, he buys the most expensive book in the store, one kept under locked glass, and inscribes it before asking Daniel to deliver it. The book is for Fermin and bears a mysterious message.

Daniel follows the old man who appears intrigued by everything he comes across from birds in cages in the market to the churches he passes and more. Daniel doesn’t fully discover who the stranger is, but he tells Fermin of his interaction with the man, and Fermin warns him away, explaining he can’t tell Daniel any more for his own safety.

Eventually, Fermin does tell Daniel the tale, and it involves why he is concerned about marrying Bernarda. This was where I finally begin to relate to the characters and become drawn into the book – though frequently no less confused than I was at the start of the novel. In 1939, Fermin was arrested for subversion and brought to a castle where he was imprisoned in a cell, a place where no one left alive.

The tale told comes a full circle with too many ties to characters old and new in the book and goes far to explain the hows and whys of so much of what is happening almost twenty years later. The characters in the prison in 1939 to me are drawn much better than Daniel and Fermin and the rest of the 1957 crew. I felt their story much more deeply than the rest of the book.

Once I had gotten deep into the story of Fermin and his life in prison, I had a much greater appreciation for the remainder of the book. I loved how Daniel and the rest came together in an attempt to make Fermin’s wedding possible and again to see how so much of it came tied together again, though with so many loose ends even on the last page. Having not read the remainder of the novels in this cycle, I am only assuming that they are all cleared up if you read all three.

Michelle loves how the world so often comes a full circle in real life as much as in books. That said, she’s utterly grateful that her life is never as dramatic as the ones she read about in “The Prisoner of Heaven.” See the drama on a smaller scale by reading her blog Honest & Truly! or following along with her on Twitter where she is also @HonestAndTruly.