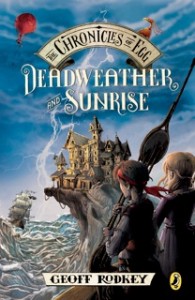 I love having children who adore reading. I know that I’m lucky, but we have challenges, too, in that Mister Man is a nine year old whose reading level exceeds his grade level. He’s read books that are too old for him that I’ve since pulled back, and I was a little skeptical initially about the series The Chronicles of Egg because it is about a thirteen year old boy who lives on a pirate infested island with violent siblings, and the like. Reading a little more on the book, however, I saw that there were several parents who had reading the book with their children and didn’t have any issues.

The first book in the series, Deadweather and Sunrise, by Geoff Rodkey has been an immediate hit in our house. Both Mister Man and I have read the book about Eggbert (or Egg once he gets to choose his own name) as he tries to figure out the mystery of what his father had just discovered before a ballooning accident took the life of Egg’s brother, sister, and father. As Mister Man read, he kept coming to me to tell me something funny that happened, “Mom! The tutor Percy thinks that you can’t multiply fractions together because they’ll break if you do! How funny is that?” He giggled his way through the book, and I had to sneak it when he was at school to read it because he didn’t want to give it up.

I liked it because the language of it was at a fairly sophisticated level. Mister Man has learned the meaning of words like “sussed out” and “garrison” “leeward” while not being so difficult that he struggled to understand any of it. That is the best kind of book in my mind. I was a little disappointed that Rodkey needed to include swearing – or an approximation of it – in several places throughout the book. Each time, he used — to stand in for the actual words, but having Guts (a pirate who is introduced as Egg’s opponent in a cage match to the death aboard a pirate ship) refer to a legendary pirate as Burn —- Healy each time was something I, as a parent, could have done without. My nine year old is ignorant as yet of swearing, but I also don’t want or need him to see it as so common and accepted in books he’s reading – yet.

The Deadweather and Sunrise in the title of the book refer to the two principal islands Egg knows. He lives on Deadweather on an ugly fruit plantation his father owns, an island that is filled with pirates and has nothing going for it from the hot and humid weather to the vomit on the streets from the drunk pirates. Sunrise, on the other hand, is a golden paradise. Or rather, a silver paradise, as there is a silver mine – worked by natives – that provides immense wealth to those who live on the island that luckily has the perfect climate, as well.

Egg and his family (along with Percy, the tutor) travel to Sunrise to meet with a lawyer who can help Egg’s dad with a discovery he has made while out walking to clean a cannon on his land. Though they typically only travel to Sunrise twice a year, something has come up that requires an immediate visit. While there, they are befriended by Roger Pembroke, the owner of the plantation and ostensibly the puller of the puppet strings on the island. When Egg’s family is mysteriously blown away while on a balloon ride, courtesy of Mr. Pembroke, Egg stays on with the family where he falls in calf love with the Pembroke’s daughter, Millicent. Mr. Pembroke disabuses him of any notion that he will someday marry Millicent, and offers to adopt him instead.

When Egg turns down Mr. Pembroke’s generous offer to adopt him, Mrs. Pembroke suggests he quickly flee Sunrise. Egg doesn’t and Mr. Pembroke the next morning offers to take him on as an apprentice because there’s “something special about you, son. You’re a rare talent.” As he goes with Birch, an employee of Mr. Pembroke, on a tour of the silver mine, Birch attempts to push him off a cliff and directly admits that Mr. Pembroke sent him out that day to be killed by Birch. Egg escapes, and thus begins his journey to prove himself worthy of Millicent, thwart Mr. Pembroke, and figure out what his father had discovered.

The adventure is fast and fierce. It’s a lot of fun, even as an adult. It’s easy to see where the next book will pick up, and a second book in The Chronicles of Egg is coming in May, 2013 – New Lands. I can definitely see this book series bringing in reluctant readers in the way the Harry Potter series did, especially for middle school students. The two are very different, but both have engaging young heroes and supporting heroes and face difficult situations on their own. Sunrise and Deadweather has been at times hilarious (Mister Man still can’t get over the fact that Egg doesn’t know what “sue” means, and I love the scenes with the spoiled boys threatening to have their fathers sue each other) and full of adventure, while other times being quirky or mystery.

Personally… I can’t wait to pick up New Lands to see where Egg, Guts, and Millicent will take us.

In the interest of full disclosure, I received a copy of “Deadweather and Sunrise” for review purposes. I was not otherwise compensated, and all opinions remain my own.

Written by 5 Minutes for Books contributor Michelle who wishes some of these books had been around when she was a child. See what else she’s reading and the little mysteries she encounters in her life on her blog Honest & Truly! or follow along with her on Twitter where she is also @HonestAndTruly.