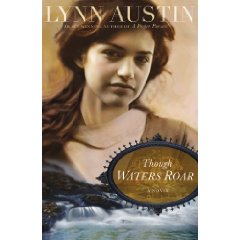 , which is the latest book by Christian author, Lynn Austin.

I read Austin’s A Woman’s Place (click on the link to read my review) which I really rather loved, despite the fact that I think Austin overplayed the “women are equal to men” card. I followed that one up by reading A Proper Pursuit which I reviewed here at 5 Minutes for Books and, after reading that book, did a little exploring online and discovered that the author had a very special relationship with her mother and grandmother and seemed to really be interested in the changes that women have undergone over time, culturally speaking. I was growing a little weary, but still liked Austin’s style enough to be really excited to try my hand at this newest foray into Austin’s imagination.

It isn’t that Austin can’t tell a good story – because she can! I would venture a guess that if you are a regular fan of the Christian fiction genre, then you will absolutely love this book without question. Her stories are usually of a length that gives you plenty of time to really appreciate the main character and their particular struggle. I’ll not spoil the story for you, but in Though Waters Roar

we are introduced to Bebe (short for Beatrice) who is telling the story of her life to her granddaughter, Harriet. Harriet finds herself in prison, during (or shortly after) the first World War for a reason that is not explained until the very end of the book. As Harriet lays in her jail cell, she is remembering the stories that her Grandmother Bebe told her about her early marriage to Horacio Garner – which was something less than pleasant. (And at this point I really have to work super duper hard not to totally poke fun of the names which Austin gave to her characters! If I had to read about the handsome and debonair Horacio for much longer….)

The gist of this story is that God can use women mightily, no matter what the life circumstances they might find themselves in. Marriages can be wonderful or hard. Children can be spoiled or not – each must find their own way. And God can use anyone. That’s not necessarily a premise I disagree with, but Austin does have a way of needling her point home a bit which I don’t think is very smooth. I’m constantly feeling jolted out of the story because I know there’s an underlying message that Austin wants me to take away. While I do agree with the fact that each story we ever read will present it’s own world view, I like to be forced to think about what the message is that is being communicated. In other words, I’d rather the author of any book not just dump their beliefs on a silver platter and hand it over for my convenience. Draw me in. Make me think. Convince me! I had a little bit of a hard time with this book because of it’s lack of subtly in the “women’s rights!” department.

That said, Though Waters Roar

is a work of historical fiction and I do so enjoy historical fiction. When we first meet Bebe she is working on her family’s farm prior to the Civil War. Her mother (and technically her father also) are workers in the Underground Railroad, so Bebe gets an early education on pursuing moral truths from an early age. She, too, helps hide the slaves as they are pursuing freedom. The story moves us into the Civil War when we watch Bebe’s brothers trickle off to join the Union army. We walk through the temperance movement and finally hit on the passage of the 19th Amendment.

I DID care about the characters that Austin introduced us to and I was anxious to read through to the end to find out what happened to Bebe, Horatio and where their life stories would take Harriet in her own Quest for Truth. The family dynamics in this book are intriguing to say the least and you can’t help becoming wrapped up in their lives. You might not always like them or agree with their choices, but you want them to succeed in the end, breaking free of chains that are tying them to difficult pasts.

My own personal hesitations about this book aside, I have no qualms in recommending it alongside Austin’s other works. I think my favorite is still A Woman’s Place but Though Waters Roar

is intriguing as well.

Have you read it? What did you think of it? I would love to hear your thoughts and opinions on this book! In the meantime, I think I don’t mind reading Austin books but I do like them spaced so it will likely be a bit before I pick up another one.