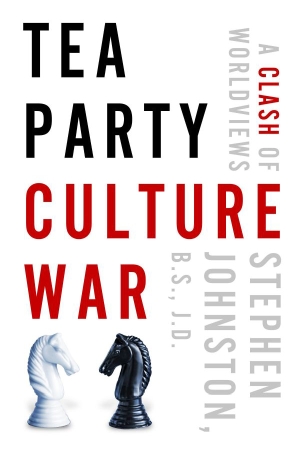 Truthfully, I didn’t complete this read. I felt I didn’t have to because I knew what the author, Stephan Johnston, B.S., J.D. was going to say.

is that we are currently in not just a political war (i.e., Democrats vs. Republicans) but a culture war. Johnston is very passionate about his particular position within this culture war, in which he falls heavily to the conservative right. (Think Ron Paul and perhaps a bit further right.) Now, I personally am a Republican and conservative so his view points didn’t exactly bother me, per se. Part of the reason that I felt I didn’t have to complete reading the book is because I wasn’t reading it to be persuaded. I’m already persuaded. That said, I’d probably choose to approach the subject matter a little differently than he would as I think he is more extreme in his arguments than I am in mine. I would not recommend this book to anyone who I would like to see more eye-to-eye with in hopes that they might be convinced by his arguments. Quite frankly, I don’t think he makes his points very well. This book feels more like bluster than calm, well laid thoughts and ideas. I know that many would see it that way.

It’s not that Johnston is not trying to be rational in his thoughts. He is! What he attempts to do here is to lay out historical arguments for why more liberal policies have traditionally and historically failed and why more conservative policies have been more successful as a whole. He argues using statements by the founding fathers, philosophical statements from well-known philosophers and references history to make his point. (He is also a Christian and emphasizes his faith throughout the book. Again, I don’t have a problem with this but I know that’s going to sidetrack certain individuals who are just trying to sort through the political/social issues.) I see where Johnston is going and while I would agree with him in general, I felt that he would randomly draw in people and quotes that were more often irrelevant to his point than not. That, and he really likes using adjectives and labels. His labeling system was applied much more generally and liberally than I thought was in his best interest, as it distracted from the points he was trying to make. (For example, in one specific instance he was laying the foundation for a historical argument and then threw in a quote from Rush Limbaugh while making it very clear that he likes Limbaugh a lot. My opinion on Limbaugh is neither here nor there when it comes to discerning the relevance of the history which he wished me to understand.)

could prove valuable if you want to understand why it is that the current Tea Party came into existence and what their most passionate opinions on any given issue are. Judging from the adjectives and labels which Johnston uses (at least in the first few chapters which I read) I would say that he is a firm supporter of the party and would like people to understand the necessity for such a third party within today’s political landscape. I’m just not entirely comfortable with his presentation and wouldn’t link my name to his in anything other than this brief review of my impressions of this book. (Again, I confess that I didn’t read it in full. I read the first few chapters and then skimmed the rest because he was fairly predictable – to me – in the things which he was sharing about.)

I was sent a copy of this book by WinePress Publishing in exchange for my honest opinion of it. Honestly, I wasn’t impressed. I see what Johnston was trying to do, but I believe he failed because his passions got in the way of laying out a solid historical framework for making the arguments that he wished to make. Only a select few are likely to enjoy this book thoroughly and I think many would be confused by his remarks. Because I think this book has the potential to confuse more than the ability to simplify and explain, I’m not lending my endorsement to it. I’ll just mention it to you so you are aware of its existence.

One additional note: Johnston is writing to the present day audience, with the 2012 presidential election in mind.

Thanks to WinePress Publishing for giving me a go with it!

Carrie blogs about books she likes – and sometimes books she isn’t as fond of – regularly over at Reading to Know.

« Memoirs of an Imaginary Friend
On Reading: Required Reading »