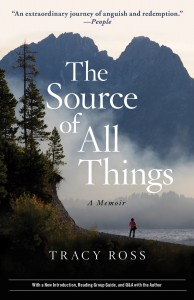 When I tell you that The Source of All Things is Tracy Ross’s story of struggling to make peace with the sexual abuse at the hands of her father, you know not to expect a light, easy read. However, if you often read to understand — like I do — memoir takes you to places you are glad you never had to go.

In this respect, The Source of All Things hits that aim. Ross’s situation is quite different from others who are abused, in that after it was uncovered, she left the home for a year or so, but returned later in her teen years to the home, where her dad was still living. She also never became completely estranged from her parents

The crux of this book is that many many years later, she takes her father to “the source of all things” — the same camping site where the very first incident took place when she was only 8 years old, where he’s agreed to be transparent with her about what really happened. One of Ross’s problems in dealing with everything is that she mostly remembers a happy childhood (though her memories of the abuse are real, not “recovered” memories), so she feels she has to know the truth to move on to full acceptance and perhaps forgiveness.

Most of the book reads as a chronicle of her life: in high school she was a track star and an award-winning poet, she experimented with drugs and ultimately dropped out of college; she sought out risky jobs in the wild; she had a bad marriage. Obviously her past influenced these life choices.

In the end, I can really only recommend this memoir to those who either have been abused and want to find community with someone else who has been through the same, or someone who wants to be able to understand what a friend or family member might have been through. As an outsider, it’s painful to read, and yet, it almost doesn’t go deeply enough into how everything impacted her.

Jennifer Donovan blogs at Snapshot about her thankfully uneventful life.