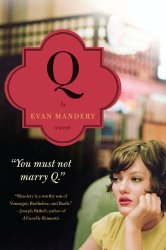 The quote on the cover of Evan Mandery’s new novel drew me in: “You must not marry Q.” The paths of this intricate and absorbing story begin at this juncture, and for the protagonist in Q: A Novel, everything hinges on whether or not he follows this heartfelt advice.

I’m going to state that in order to make this a spoiler-free review, there’s not much I can say about the plot other than filling you in on the starting point. The unnamed protagonist tells the story in his own voice, from the beginning of his unique and simply lovely courtship of Q, Quentina Elizabeth Deveril, until the period just before their planned wedding, when he is visited by someone, very unexpectedly. This someone makes the plea for him to not follow through with this planned marriage, and his argument and reasoning is emotional and wholly convincing.

The life that follows for the main character is filled with many, many twists and turns that would be spoiled for you, the potential reader, if I explain any further. Suffice it to say that you most definitely should read this novel, for the experience is one you will remember.

I was especially struck by how skillfully the author weaves several parallels in the protagonist’s experiences with small details from conversations and discussions sprinkled throughout the book. Impressive, too, is the amount of research into seemingly odd subjects such as Sigmund Freud’s work before psychology, in order to fill in the details of the protagonists’ work as an author. Yes, there are a few stories within the story here, and Mandery even manages to make fun of that in a passage in which the protagonist is getting feedback about his own writing. Everything about this book is intensely clever.

At one point, the protagonist is trying to make a career writing counter-historical novels– what would have happened if William Henry Harrison had worn a coat to his inaugural speech and not contracted the illness that felled him early in his presidency? This concept parallels the entire plot of this novel, in which the reader is often asked to ponder, ‘what if?’

I was completely bowled over by Q: A Novel, and for this reason, I’m happily ranking it among our 5 Star Reads, and I strongly recommend it for a wildly thought-provoking read.

This giveaway is closed.

Getting lost in a novel is one of Dawn’s most favorite past-times. Blogging away at my thoughts exactly ranks up there, too.

« The Berenstain Bears’ Bedtime Battle
The Last Letter from Your Lover »