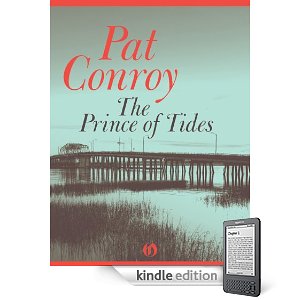 The story of the Wingos is one of humor, grotesquerie, and tragedy. Tragedy predominates.

Prince of Tides by Pat Conroy

A while back Open Road media let me know that they were publishing some of Pat Conroy’s backlist titles as ebooks. I remembered reading and loving The Prince of Tides back in high school or college, so I agreed to check it out on my kindle (also available on all the other popular e-reader platforms).

Well I finally got around to it (as a part of my rekindled love affair with my kindle), I was absolutely riveted. The fact that I knew a little bit more about Pat Conroy after recently listening to his memoir The Water is Wide helped me slide into the fictional world of the Wingo family living on the water of South Carolina even more.

This is a hard read. There is abuse and there is anger, and that abuse has led to dysfunction and distress in the Wingo children, now adults. The whole story is told by Tom Wingo to his sister’s psychiatrist Dr. Lowenstein when he goes to New York after Susannah’s umpteenth attempt to commit suicide to try to quiet the demons.

It’s hard and some will avoid it because of the subject matter and some profanity, but I am absolutely enthralled by Pat Conroy’s writing. The story unfolds as a type of character-driven suspense as he foreshadows and eventually reveals the penultimate crisis in the family, that which caused Tom’s own nervous breakdown.

Instead of continuing to gush, I would like to share some of Conroy’s own words, to convey both the plot and the style:

“It’s an act of will to have a memory or not, and I chose not to have one. Because I needed to love my mother and father in all their flawed, outrageous humanity, I could not afford to address them directly about all the felonies committed against all of us.”

“I grew up in South Carolina, a white southern male, well trained and gifted in my hatred of blacks when the civil rights movement caught me outside and undefended and proved me to be both wicked and wrong.”

“The American male is a quivering mass of insecurities. If a woman makes the mistake of loving him, he will make her suffer terribly for her utter lack of taste.”

“You’re not a bad mother. Bernard is a teenager. Teenagers are, by definition, not fit for human society. It’s their job to act like ___ and make their parents miserable.”

“In the hour it took to finish that meal, I learned that silence could be the most eloquent form of lying.”

“If they are lucky, good coaches can become the perfect unobtainable fathers that young boys dream about and rarely find in their own homes. Good coaches shape and exhort and urge.”

This is absolutely a 5-star read. It had been at least 20 years since I read this book, and I remembered one of the awful events, but the rest was just a light fog of familiarity. This is a long book, but I savored every single page and am so glad that I revisited it.

Jennifer Donovan reads and blogs. She reads everywhere and almost everything, and she blogs at Snapshot.

« Tugg and Teeny
Prince of Tides: Books on Screen »