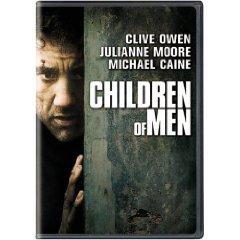 I read The Children of Men by P.D. James last year, because I knew I wanted to see the film, and because I had heard so many good things about Ms. James’ work. This was my first experience with her writing, but I have since read some of her mysteries, and she has become a favorite author.

The Children of Men vividly demonstrates what happens when humankind values sex more for pleasure than for procreation, when they value pleasure and comfort over justice and mercy, when they seek for perfection and despise human frailty. It is not an easy read, in the sense that it is disheartening to read such a clear picture of what humankind is capable of if left to it’s own designs.

The book opens in 2021. It has been 25 years since the Omega, the name given to the last year that included any human births. No babies have been born or conceived since. Doctors and scientists have exhausted all resources in their search for a reason for this phenomenon, as well as a solution. All efforts have failed, and the human race has accepted the fact that it is dying out.

The book is told in two ways: through the journal entries of “Theodore Faron, Doctor of Philosophy, Fellow of Merton College in the University of Oxford, historian of the Victorian age, divorced, childless, solitary, whose only claim to notice is that he is cousin to Xan Lyppiatt, the dictator and Warden of England…” and through third-person narration following Theo’s experiences with a subversive group known as The Five Fishes.

I don’t want to give too much of the plot away to those of you who are planning to read this book or see the film, but I will say that Ms. James gives a strong argument for valuing each and every human life.

After reading the book, I was sent the movie to review on DVD. I was excited to see it, because Clive Owen and Julianne Moore are both brilliant actors. There were a few similarities between the book and the movie:

In the book, Theo’s wife Julian (portrayed by Julianne Moore) is a shallow character who barely makes an appearance. In the movie, Julian is an underground political activist who cons Theo into helping the pregnant girl by offering him 5,000 pounds. In the book, Theo decides to help the girl on principal and because he is drawn to her – not for money.

I could go on and on. Why is it that people find a book that they enjoy, think would make a great movie, and then promptly change everything about it? I just don’t get it.

And more than the character and plotline changes, there is the whole theme of the book: the sacredness of life and how a world divorced from a Christian worldview becomes a place of horror and outrage. The movie becomes a political manifesto of a different sort. In fact, the whole idea that people have stopped reproducing seems to be secondary to the fact that Britain has started deporting all immigrants and has descended into mass chaos.

As you can see, I was disappointed in this movie. Perhaps if I hadn’t read the book, and didn’t know what P. D. James’ original vision for the story was, I would have enjoyed it, but I’m not convinced. If you are a fan of futuristic sci-fi and haven’t read the book, you might enjoy this movie. But if you loved the book as I did, the movie will be a huge let-down.

Carrie Kitzmiller is a homeschooling mom of four and a freelance writer in her “spare” time. When she’s not correcting grammar and math papers, reading aloud, scaling mountains of laundry, keeping her house clean (enough), or writing, you can find her with her nose in a book. You can read her blogs at Mommy Brain and Books and Movies.

« Drowning Ruth
On That Day Everybody Ate »