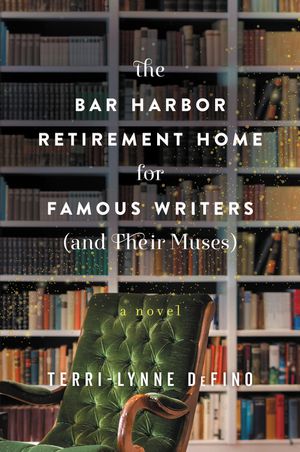 Well, that’s a mouthful: The Bar Harbor Retirement Home for Famous Writers (and Their Muses), but it’s a fitting title for a novel about a bunch of wordsmiths. Terri-Lynne Defino has written a lyrical novel set firmly in reality that somehow holds a bit of magic.

The famous writers live together in what they call “The Pen,” retreating from society and their pasts and just waiting to die.

Their writing days are over, but they are always given a pad of paper and a great pen in case inspiration hits. The muse is Cecibel, an orderly who admires many of the writers, and who is hiding out herself. An accident left her horribly mutilated and scarred, and she’d rather retreat than risk the rejection from horror that she always anticipates.

As several of the residents end up writing, we are treated to a story within a story as their novel unfolds. In this novel, we also experience some of their own backstories and insecurities.

Cecibel is privvy to the story in progress, though they don’t all know it. We also learn more and more of her story and what keeps her hiding.

This novel was such an interesting mix of romance (in the novel being written), intrigue, and human heart, that I don’t quite know how to classify it.

You can find out more and purchase the novel at the Harper Collins site.