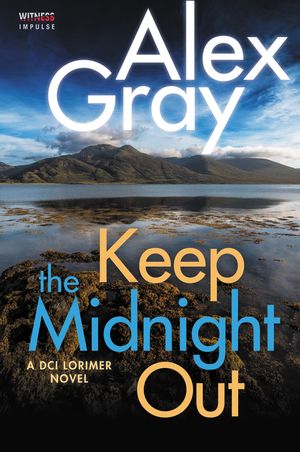 Lately, I’ve been on a bit of an Alex Gray kick. She’s a Scottish noir writer of police procedurals set in Glasgow and featuring DCI William (Bill) Lorimer, his wife Maggie, a teacher, and their friends the forensic specialist Rosie, her husband the psychological profiler Solly, and more. I got The Swedish Girl on my Kindle in January when it was on sale for $1.99 and really liked it. Since then, I’ve read about 4 or 5 in the series, so I was eager to add this one to my collection.

Bill and Maggie are taking their well-deserved annual holiday on the Isle of Mull in Western Scotland when Bill, out for his morning walk, stumbles across a dead body. Since he’s on holiday and out of his jurisdiction, he isn’t officially involved, and in fact local officer DI Stevie Crozier would really rather he’d just go back to bird-watching and leave her alone to handle things. Lorimer is careful not to step on any toes, but he can’t help being drawn in–especially as the body reminds him of an unsolved case 20 years earlier, when he was just a young officer starting out. The resemblances are certainly there; both bodies of young men with bright red hair who’ve been tied up till death and then the restraints removed and the bodies tossed into the sea. Could there be some sort of serial killer involved? The novel has some flashbacks to the earlier time, when Maggie miscarried late in her first pregnancy.

Meanwhile, we get involved in the lives of people on the island. There’s Maryka, a Dutch girl working at the same hotel as the dead boy, Rory. There are the owners of the hotel–he with a drinking problem, she with a habit of staring out at the sea as if waiting for someone to return, all the while their hotel crumbles into whiskey-scented dust. There’s a father-son team of fisherman, who get round the fishing laws a bit with gifts of fresh sea salmon left at the doorsteps of the local policemen, but whose latest escapade turned up something they’d rather keep hidden. There’s a local gardener, once a talented young artist, now content to live with his bitter, widowed sister and do a bit of fishing himself, and the local policeman, trying to avoid a certain blonde who’s had a crush on him since they were kids, and as a result overlooks some evidence.

I enjoyed Keep the Midnight Out. Author Alex Gray is gifted at taking us into others lives, creating living breathing characters with just a few sentences. She’s skilled at making us see and feel the places she’s describing, so much that I actually googled Air BnBs for the Isle of Mull! (A girl can dream, right?) Plus, I’ve gotten quite fond of Bill and Maggie, Rosie and Solly and their little girl, and other recurring characters. I do have a slight issue with how she tends to end all her books, which perhaps I’m noticing because I have read 5 of her books in as many months, but I won’t tell you my issue since I don’t want to spoil it and it’s possible you wouldn’t mind. Obviously I’m a fan, and I just bought another one for my late-night Kindle reading! Keep the Midnight Out would be a great addition to your summer reading; it’s perfect for airplane rides, afternoons at the beach, or a lunch break at the park. Recommended!