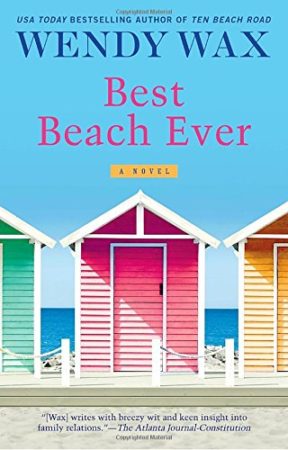 Back when we first met the ladies of the Ten Beach Road series by Wendy Wax, they were a mess. Madeleine, Nikki, and Avery lost everything they had to a Ponzi scheme, thanks to none other than Nikki’s own brother. They were left only with Bella Flora, a Florida coast mansion in dire need of repair. Their renovations were filmed by Madeleine’s daughter, Kyra, and by the end of the book, the ladies had themselves a home makeover show.

In Best Beach Ever, the last book in the series, the ladies have come a long way. They’ve accepted that Do Over is, well, over. Maddie has put her failed marriage behind her and is dating a rock star, Nikki is married to the FBI special agent that busted her brother and is the mother of twin girls, and Avery has started a tiny home construction business. Kyra has agreed to let her 4 year old son, Dustin, act in a movie with his famous father, against her better judgment. And socialite Bitsy, who joined the cast in the last book, is chomping at the bit to track down her husband and get her fortune back.

I enjoyed Best Beach Ever more than I have the more recent books. The ladies all finally find some happiness, and there’s even a bit of the renovation that has been missing from the later books, as Avery builds a tiny home for a client. Of course they all have their struggles – Maddie is torn between her role as Will’s girlfriend while he tours and as Kyra’s mother when she needs her, trying to figure out her place in the world. Nikki can’t figure out how to manage the Mary Poppins-like nanny who has taken over raising her children. Avery, perhaps in the most annoying of the sub-plots, just can’t get herself to commit to Chase. And Kyra is also torn, as she finally sees Daniel’s true colors, while also dealing with her feelings for the mystery tenant who has moved into Bella Flora.

I found this a fitting end to the series and while I will miss the ladies of Ten Beach Road, it’s also time to let them go.

For my reviews of the other books, as well as some of the short stories in the series, click here.

« Four Funerals and Maybe a Wedding: A Royal Spyness Mystery
By Invitation Only by Dorthea Benton Frank »