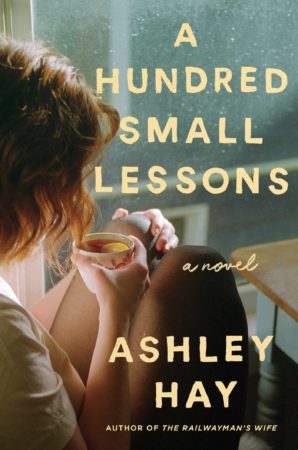 In a small cottage in Brisbane, Australia, lives an elderly woman named Elsie. She’s alone–her husband died long ago, and her twins are nearly 70, and have their own kids and grandkids. She has a nasty fall and her family decides she needs to move to an apartment in an assisted living facility. They sell her house to Ben Carter and Lucy Kiss and their year-old son, Tom. Elsie’s not happy to leave the house where she’s lived nearly all her life, and she begins to wander in her mind. Meanwhile, Lucy searches eagerly for signs of Elsie, and imagines her visiting in the night.

A Hundred Small Lessons tells the story of their lives, weaving a tapestry made up of every day’s most quiet moments; watching a small child sleep, breathing in a sunrise, working in a garden, making tea. The story line moves back and forth. Sometimes we are with Clem, Elsie’s husband, a simple man who loved Elsie and their children with all his heart, who died of pneumonia while in his early 50s. Sometimes we are with Elsie, mystified at her strained relationship with her daughter and seeming to always say the wrong thing. Ben and Lucy and their more modern partnership echo the past in many ways, as Lucy stays home with Tom, and Ben watches the two of them with complex emotions.

Elsie is taken out of herself and given a glimpse into a different world when a local artist asks her to model for a portrait, and the action has reverberations that Elsie herself doesn’t understand and that she fears. Now, elderly, having lost many precious things, she clings to her memories. Lucy is convinced that the sounds she hears–slams of the door, footprints fading in the early-morning dew, glimpses of an elderly woman in a faded chenille dressing gown–are Elsie visiting her old house, but Ben thinks she’s crazy and it causes some friction between them. She finds a few forgotten things, an old mug and some doilies, and saves them only to have them ruined in an echo of some events from Elsie’s own past.

The stories of this book celebrate the wonder and momentousness of the ordinary. Ashley Hay is a skilled writer, and her language is evocative, whether that be of a hot wet Brisbane summer, or the colors chosen by an artist, or special moments bonding strangers. It’s a book about families, about parents who leave by choice or through death, about parents who stay and create wondrous moments of their own in turn for their children, who turn houses into homes. A lovely book.