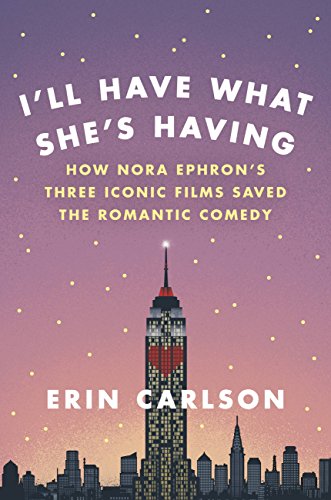 I do love Nora Ephron. I remember watching and enjoying Heartburn starring Jack Nicholson and Meryl Streep when I was just a teenager. I now know it was based on the true story of her own marriage falling apart from journalist Carl Bernstein.

I’ll Have What She’s Having‘s subtitle says it all: How Nora Ephron’s Three Iconic Films Saved the Romantic Comedy. Of course those three films are When Harry Met Sally, Sleepless in Seattle, and You’ve Got Mail — favorites all.

This well-written and engaging nonfiction book by Erin Carlson takes a look at Nora Ephron’s career in writing and directing movies. It also gives a lot of background and impact of her supporting players: Rob Reiner, Tom Hanks, Meg Ryan — to name only a few.

I think that this book is best reviewed in bullet form, hinting at what might be to come instead of giving it away. Some of these topics included in this book that I loved reading include

If you enjoy nonfiction that gives you an insider’s look into a certain profession or way of life, this book is for you. If you are interested in the film industry, or a die-hard fan of the romantic comedy, this book is definitely for you. There’s a lot of information here. It’s not a breezy narrative non-fiction tale, and yet, there’s a story there, and one I wanted to keep reading.

Find out more about the book and author and read other reviews at the TLC Book page.

« The Sworn Virgin
City of Saviors »