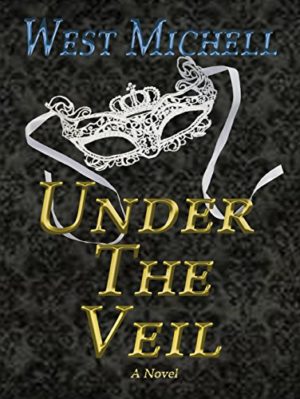 Lauren Wells is living the dream of a twenty-something with an apartment in NYC with her best friend and a job at a banquet hall when she’s suddenly abducted from the street, waking up in the desert on the back of a horse with a man she vaguely recognizes.

Prince Adi’s father, the king of Cacher, a small nation on the edge of the Western Sahara, has taken Lauren to marry his son, without Adi’s knowledge or permission. Lauren wants to hate the prince, but finds he’s a kind man who wants to be out from under his father’s thumb. King Silas is dying, but there are others who want to take over the kingdom, putting Adi’s and Lauren’s lives in jeopardy.

Will Lauren give in to her feelings for the prince? Will she ever see her family again?

Under the Veil is full of romance, mystery, and intrigue, and I couldn’t put it down. The fact that I’ve known the author for several years did not at all change my opinion of the story. Lauren is a strong heroine, caught between her desire to be free and her desire for Adi. The prince is strong and handsome, as the hero of a romance should be, trying to protect her at all costs, even when she doesn’t want to be protected. They are surrounded by people who want to help and hurt them, and Lauren doesn’t know who she can trust.

This is author West Michell’s first adult novel, though she’s published children’s books with her son, and I look forward to the next one, currently in progress.

Under the Veil is available in paperback at the author’s website or for Kindle at Amazon.

« On Duck Pond
The Wide Circumference of Love »