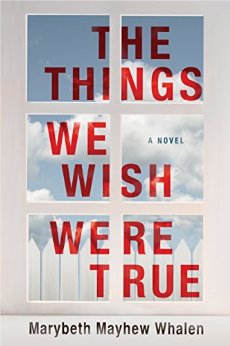 People talk about judging a book by its cover. I do that sometimes, for good and for bad, but what really draws me in to a novel is a great title, and The Things We Wish Were True is a great title. It’s one that made me read the description readily and quickly agree to review it. The title didn’t lead me astray. The novel — like the title — is thoughtful and grounded and yet also somewhat lofty.

The neighborhood pool at Sycamore Glen serves as an anchor to the community. Opening day and Fourth of July create memories for all who live there as they gather and gossip. They watch their own kids and each other’s kids as the kids wait in line for the high dive and popsicles.

A good friend of mine is going through something right now. I sent her a text to check in. She responded that she was doing something she loves, but that felt like an actor. It made me think how many of us act our way through a tough situation. I think it’s okay for a little while, but we have to have people who allow us to take off the costume and stage makeup.

The people of Sycamore Glen act their way through believing what they wish was true, but they also know what is true, and for the most part end up allowing others to see the real truth and help them get through it.

An inciting incident — a near-drowning at the pool — brings all of these characters together in surprising ways, and it’s clear that even if they weren’t looking, community was what they all needed.

This was a novel that kept me turning pages and making connections with my life and the people in it.

« What’s on Your Nightstand, September 27
Home by Harlan Coben »