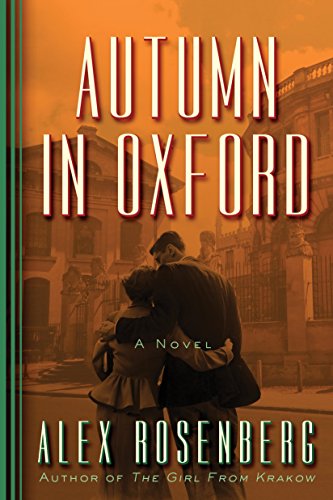 Autumn in Oxford is a walk through 20th-century history wrapped up in a murder mystery, and overall it’s well done and a good read although it lags a bit at times.

It’s 1959, the height of the Cold War. Thomas Wrought is an American professor at Oxford who is having an affair with a neighbor woman named Liz Spencer. He is traveling on the London Underground when he sees Liz’s husband, and a man dressed as himself shoves the other in front of the tube, killing him. Within hours, Wrought is arrested and the case is closed; he had means, motive and opportunity. What is strange is how quickly the police have seized on him as a suspect, closed the case, and put him in jail. Liz, convinced of his innocence, hires the young up-and-coming lawyer Alice Silverstone, who sees some mysteries in how quickly the police wrapped everything up, and how hard a time she’s having getting in to see her client.

Action then moves back to the beginning of the affair, and Wrought’s subsequent divorce of his wife. This is where things lagged for me, as the author dips perilously close to writing a romance, but it picks up when Alice visits Tom in jail and asks him to write out the story of his life. Tom’s life was one that closely followed 20th-century American history. He was born in Finland but grew up the son of immigrant parents in New York. At 17, he joined the Communist Party, because they were the only ones who cared about racial equality at that time, only to resign his membership in disgust a couple of years later when Stalin signed the non-aggression pact with Hitler. He joined the army and is sent to officer training in Louisiana, where he ends up leading the first Negro division into battle in France. He’s then recruited to join the OSS (precursor to the CIA) and go to Finland, where he works with undercover American and Russian spies. At all these various points along the way, he manages to step on toes–whether that be fighting for civil rights in an unsegregated army or watching in dismay as American CIA operatives are exposed and left undefended. I found this section of the book a very interesting look at an aspect of history I hadn’t ever  considered very closely before.

It’s pretty clear to Liz and Alice that someone from Tom’s past is orchestrating events to discredit and ruin him. But who? Is it Britain’s own M15 and M16, the KGB, or the CIA and/or FBI? As they search out clues, they need boldness and courage, because their own lives are now in danger. And how can they know who to trust, in this tale of spies and double agents?

Author Alex Rosenberg peppers his tale with several actual historical figures, which adds complexity to his narrative. Overall, an interesting read, especially for those who enjoy historical fiction set in the recent past.