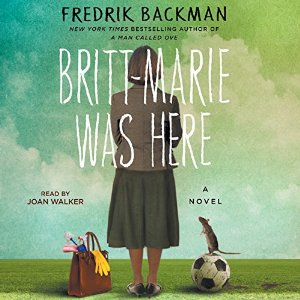 Britt-Marie is looking for a job after 40 years of being a wife and homemaker. She’s left her husband and needs to support herself, but she has no real skills other than cleaning, cooking, and taking care of the house. In order to get Britt-Marie out of her hair, the girl at the employment office finds her a job at the recreation center in the tiny village of Borg.

To say Britt-Marie is set in her ways would be an understatement. Her world is rocked when she can’t find her favorite cleaner in Borg, and the people of Borg are not exactly what she would consider civilized human beings. There’s the woman who runs the pizza restaurant/car repair shop/coffee shop/whatever else is needed from her wheelchair, a police officer who has a crush on her, her mostly blind landlord who wields her cane like a weapon, and the kids on the local football (soccer, but this is Sweden) team who take a liking to Britt-Marie.

When the kids need a coach for their team in order to play in a tournament, Britt-Marie finds herself signing up. She knows nothing about football but the kids have no one else who can do it.

Britt-Marie Was Here is a quirky and fun novel, though it has some sad undertones. There are reasons that Britt-Marie is so rigid in her regimes, going back to an incident in her childhood, and the citizens of Borg have been greatly affected by the financial crisis. But Britt-Marie grows quite a bit during the course of the novel as she learns to stop being so OCD about every thing and start enjoying life.

Britt-Marie is actually a character from one of Backman’s previous novels, My Grandmother Asked Me to Tell You She’s Sorry, though I did not know that until I started writing this review. I still greatly enjoyed Britt-Marie.

Notes on the audiobook: I enjoyed Joan Walker’s narration of Britt-Marie Was Here. It has a running time of just over 9 hours and it’s an easy listen.