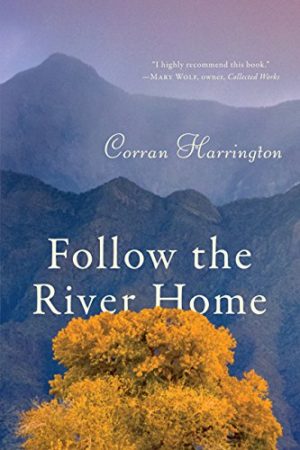 Daniel Arroyo has been home from Vietnam for over 30 years, he just doesn’t always know it. He’s also still living with the guilt of his baby sister’s death, a tragedy he can’t help but feel he had a part in. And to top it all off, he decides to leave his wife in the middle of the night for another man, though he’s not really sure if he’s gay.

Follow the River Home is a beautifully written story of a man who doesn’t quite know where he belongs in the world. Daniel’s present day focuses on his job as a hydrogeological technician, tracking the levels of the Rio Grande, the breakup of his marriage and his son’s dealing with his own effects of his time in Iraq, and his need to help the homeless woman he knew when they were both kids. These events are mixed in with flashbacks to finding his baby sister in her crib, sexual discovery with his neighbor and best friend, and the events during Vietnam that haunt him until this day.

Halfway through Follow the River Home, the point of view changes from third person, with Daniel as the focus, to self-contained chapters that are more like short stories. These are often in the first person, with the narrator someone whose path Daniel crossed during his story, from the homeless woman to a singer in a bar to the man Daniel leaves his wife for. Others are a little off the beaten path, like the one narrated by the furniture in Daniel’s home. The Rio Grande itself is featured in most of these as well, almost like another character in the novel.

Follow the River Home is a novel of depth and beauty that can be read in a few hours. It’s not what I would consider a summer read, but it’s a book you should read this summer.

« Neverwhere–Author’s Preferred Text
The Sun in Your Eyes »