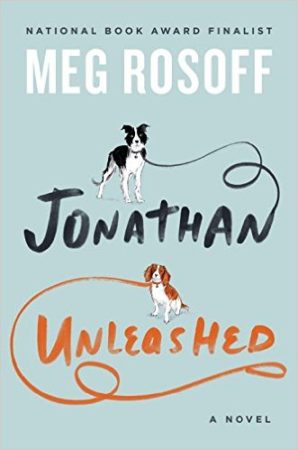 Jonathan doesn’t really like his life. His job is boring and soul-sucking, his relationship with his girlfriend could be described as the same on a bad day. In reality, things aren’t all that bad. He’s got a good NYC apartment (though he might be kicked out at any moment when the owner makes parole). He gets to work with his best friend and enjoys.cycling to work. He is comfortable with his girlfriend, and they understand each other.

Then Sissy and Dante enter his life. They are his brother’s dogs who he agrees to keep for the 6 months his brother is working out of country. Jonathan knows nothing about dogs, but he can’t seem to shake the fact that they aren’t happy, that they want something more. He even asks the vet how to determine and what to do if they hate their lives. That is where Jonathan Unleashed comes in.

It becomes obvious that Jonathan is projecting his own dissatisfaction onto his dogs. And then his dogs begin the process of changing things on his behalf, or at least trying — and succeeding — with making it more palatable. There is a slight suspension of disbelief required, but it’s totally in line with the satirical feel of the novel.

Author Meg Rosoff makes some interesting observations about the way most of us live our lives. She also characterizes Sissy and Dante in a way that dog-lovers will appreciate. For example, this scene when Jonathan continues to take the issues of his dogs’ perceived unhappiness to the vet:

She [the vet] frowned again. “The whole thing about dogs is that, within fairly broad criteria, they love their owners. Dogs are loyal. Generally uncritical” (page 97, ARC).

Meg Rosoff has apparently written many award-winning YA novels, but I was unfamiliar with her. I liked her writing, but this one didn’t quite hit all the right buttons for me. There’s only so much satire I can take, and I think this just went slightly over. I didn’t love this book, but I liked it. The last third was excellent, when Jonathan’s life spins even more out of his control, which forces his hand in dealing with the dogs and his job and his perfect, but not entirely desirable girlfriend Julie.

« Before the Fall
In Twenty Years »