Garth Stein is best known for his novel told from a dog’s point of view, The Art of Racing in the Rain. Last year he wrote a gothic ghost story with a teenage boy at the heart of the story, and that novel, A Sudden Light, is now available in paperback. Here’s my review of the audiobook, which I can still hear in my head a year later. 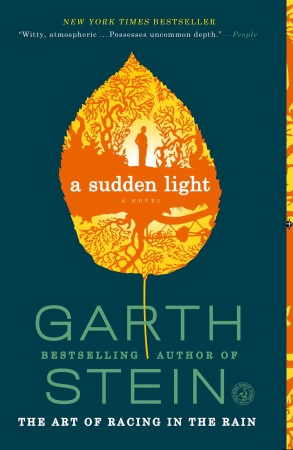 14-year-old Trevor Riddell has come to his family’s estate, Riddell House, with his father, Jones. Jones and Trevor’s mother have had some financial difficulties and have separated, and Jones’s sister, Serena, has asked him to come help convince their aging father to turn over power of attorney so they can sell the house and grounds to developers who want to tear it all down and build mcmansions. Trevor believes his parents’ separation is temporary and wants his father to finish up the house’s business as soon as possible so they can get back together.

When strange things start happening in the house, Trevor realizes there’s a ghost who wants the wishes of Elijah Riddell, the timber baron who built the house a hundred years ago, to be followed, and the house and land returned to nature rather than parceled off by developers.

A Sudden Light has a creepy, gothic vibe to it. It’s a family saga and ghost story, with lots of questions that are eventually answered – what’s Serena’s real motivation for bringing her brother home? Is Grandpa Samuel really suffering from dementia? And is there hope for Trevor’s parents’ marriage?

Notes on the audiobook: I love a talented narrator who can give different voices to each character, and Seth Numrich does this with ease. Grandpa Samuel, Jones, Serena, and Trevor are each distinct and perfectly voiced and made the audio quite enjoyable.

« For the Love by Jen Hatmaker
The Forgotten Daughter »