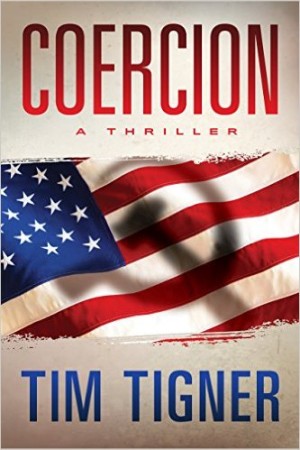 When the phone rings and you’re told to go check on your child with scary specific details, of course you go do it. And when that same caller threatens your child with imminent death from an implanted device if you don’t follow his directions, how do you say no? That’s the challenge in Coercion by Tim Tigner, where scientists in Russia have developed an implant that can kill that they use to force people to provide them with state secrets, sabotage development, and more.

The world is changing with the end of the Cold War, and there are some in Russia who aren’t happy with the direction it’s going. Vasily Karpov is highly ambitious and has been working behind the scenes with a small group of compatriots he calls the Knyaz (Russian for nobility) who plan to take Russia over for themselves and turn it into an economic superpower.

The plan has been years in the making and is finally coming to fruition when Alex Ferris’s brother commits suicide. Ferris is a former CIA agent and now private “investigator” who doesn’t believe his brother committed suicide and begins an investigation that takes him from California to Siberia as he chases the truth, realizing slowly just how big that iceberg is.

The book is a fascinating thriller that alternates between past and present, American and Russian, to tie the story together and help the reader get all the pieces without making it too simplistic. It’s an intriguing concept to think about how you far you would go to sabotage or turn over secrets with a loved one threatened, and Tigner does a wonderful job balancing on that edge of danger and emotion throughout the book.

Tigner himself is a former Green Beret and was stationed in the Soviet Union during its collapse so has an innate understanding of the politics on both sides during that time that he weaves seamlessly into this novel. While you have to suspend some disbelief as a reader to accept all that is happening – including a few too many coincidences for real life – once you do, you’re swept into the complex novel.

The truly impressive part is that for as many characters and plots and subplots as are contained within the book, Tigner does an admirable job weaving them together and not requiring the reader to continually stop and try to remember who a character is or why he’s in a particular situation. It was refreshing, as well, to have a political thriller that isn’t focused on terrorists as we see them so often in America now – Muslim extremist – but another vein that we often forget still exists.

Written by Michelle of Honest & Truly! who certainly hopes she would never have to deal with such a conundrum. See the smaller decisions and choices she makes as she shares her life (and food) on her blog Honest & Truly! and follow along with her on Twitter and Instagram where she’s also @HonestAndTruly.