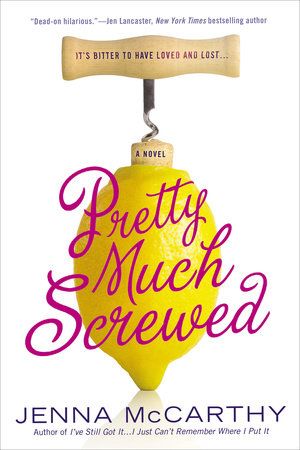 After twenty years of marriage, Charlotte Crawford hears terrible words from her husband- “I want a divorce.” If she thought that was the worst possible thing he could say to her, his follow-up was a kick in the gut- “I don’t love you anymore.” It’s a rather dark place to begin a novel, but in Jenna McCarthy’s hands, be assured that there will be laughter. Pretty Much Screwed ends up being lighter than one might first expect, but perfectly timed for satisfying summer reading.

The peek we get into Charlotte’s marriage in the beginning of the book makes it pretty obvious (to everyone but Charlotte, it seems) that it is on its last legs, with both she and her husband in different states of misery. But at forty-two, Charlotte figured that no marriage was perfect, so this must just be their lot in life, and she is honestly blind-sided by her husband’s declarations. Her life gets a bit turned upside down by her husband’s departure, and her experiences trying to eventually reenter the dating scene end up being groan-inducingly terrible, but just right as fodder for hilarious storytelling.

Just when she gets to a point where things seem to be falling into place for Charlotte– maybe too perfectly, even– our imperfect protagonist finds a way to throw a wrench into it all. A couple wrenches, in fact, and no one is better at punishing her than herself, which she does on a grand scale. Sorry for being vague, but the twists and turns need to be experienced in the reading.

What can be said without giving too much away is that Charlotte is one of those female characters with whom readers can relate, even if they want to leap into the pages to strangle her… just a little bit. Who among us doesn’t have even just a quiet self-critical voice that might keep us from being our best selves? We don’t always make the best decisions for ourselves, even when our hearts might be in the right place. This is Charlotte, and even though she’s in her 40s, she’s still got some maturing to do. (As do we all, I’m pretty sure!) She’ll get to a better place, but damn if it’s not a bumpy ride.

Jenna McCarthy (please, please note the A at the end of her first name!) has also penned two humorous books about marriage and getting older, both of which I’ve reviewed in recent years, after wiping away the tears of laughter– If It Was Easy, They’d Call the Whole Damn Thing a Honeymoon: Living With and Loving the TV-Addicted, Sex-Obsessed, Not-So-Handy Man You Married and I’ve Still Got It… I Just Can’t Remember Where I Put It: Awkwardly True Tales from the Far Side of Forty. Pretty Much Screwed is her first novel for adults, and it is written in the same funny, irreverent tone that we’ve come to expect from McCarthy.