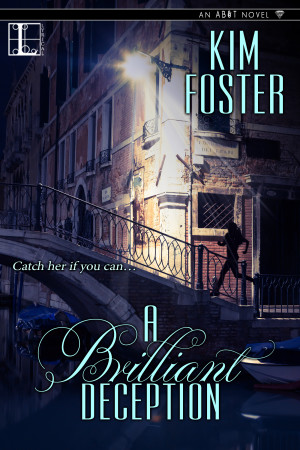 Cat Montgomery has always been a complex character–a jewel thief who nonetheless has her own code of ethics and longs to do the right thing and make her parents proud of her. But the thing is, she’s really good, excellent even, at being a jewel thief! She’s fast, can think on her feet, and is brilliant at devising ways to get away, plus she’s superb at cracking safes. But there’s a new wrinkle to her life–her mother is beginning to nag her about grandchildren. When her mother gets shot, accidentally, by one of Cat’s colleagues, Cat’s guilt leads to a determination to finally settle down. Only…then there’s this new intriguing job.

The other complication, of course, is that it’s all very well for Cat’s mother to want her to settle down, but the question is, with whom? Cat pretty much burned her bridges at the end of A Magnificent Crime (book 2, linked to my review) with both Ethan, the gorgeous fellow thief who’s taken to working with NGOs in impoverished areas of Africa, and Jack, the wealthy former-FBI ex-boyfriend, at a loose end since their latest breakup.

ranges all over–from England, to Venice, to Bali, to New York. Once again, the jewel in question is historic–the ring that Richard the Lionheart had Robin Hood guard for him. Ethan and Cat are assigned to steal it, but right as they’re succeeding, the evil gang Caliga interferes, kidnapping Cat’s apprentice to boot. That pulls in Jack, Gladys (Cat’s assistant), her professor at the University of Washington who’s also a former assassin, and Templeton, her delightful handler at A, B & T (Agency of Burglary and Theft). Cat’s not used to working as a team, but she adjusts and finds it has its advantages. Of course, the disadvantages are when someone else gets kidnapped. Cat has to pull off her most dangerous heist yet in order to save both her friend and her soul. Yes I know that sounds cheesy, but some things will kill you on the inside even if you survive physically.

I really enjoyed this book. It’s a delightful, fun read with enough thrills and heart-stopping moments to keep you enthralled, but not too demanding. This is the 3rd in the series, and I think it’s better than the last one, which had slightly too many coincidences for me. There was one point in this book (when Cat gets rescued by a passing boat) when I thought that this book was also going too have too many coincidences, but instead it all worked beautifully into the plot.

These books are fantastic summer reads; frothy and fun, like a chilled fruity cocktail. You’ll cheer for Cat as she hangs by her fingertips from a balcony or pulls off another daring heist, and you may just have opinions you’d like to discuss with her on the eternal Ethan or Jack question. I don’t think I’m giving anything away by telling you she finally makes a decision in this book, and I think it was the right one. (Of course I won’t tell you who she chooses!) Although you could start with this one, I’d recommend going ahead and starting with A Beautiful Heist–the first in the series, linked to my review. Enjoy!

« Things You Won’t Say by Sarah Pekkanen
Can a Book Spark a Memory? »