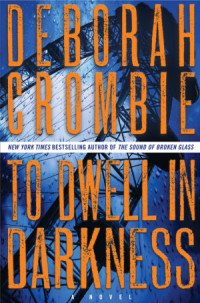 I’ve long been a fan of Duncan Kincaid and Gemma James. This married (now) police duo are a long running series, with To Dwell in Darkness the sixteenth novel in the series by Deborah Crombie. With Duncan and Gemma no longer working together but now in different divisions, some of the coincidences that allow them to still work cases together can be a bit far-fetched, but they make the books no less enjoyable.

In To Dwell in Darkness, Duncan is feeling like he’s no longer valued by the Scotland Yard now that he’s been transferred to a new department and feels like his former boss let him down. He sees it as a demotion, and Denis Childs won’t give him answers. Very quickly, he’s immersed in a new case with a bombing at a historic train station. Though it was supposed to only be a smoke bomb as part of an organized protest, it was a real bomb with deadly results. Coincidentally, Melody Talbott, an underling of Gemma’s, happens to witness the explosion, which allows both Duncan and Gemma to fully be involved in the book – and case.

As with all the Duncan Kincaid/Gemma James novels, the case is a major piece of the book, but their personal lives also take center stage from time to time. Their two boys again play a role in this book, though smaller than what they have in some of the previous books. Though some readers just want the focus to be on the action, I enjoy the tangents and time spent getting to know Gemma and Duncan outside work, and it feels natural to me.

The majority of the book focuses on Duncan solving the case. Crombie varies who has the lead case in her books. Sometimes Gemma’s case takes forefront, while other times Duncan’s is the major one to be solved. I appreciate that each character gets star billing in different books (which do work as stand alone books, though there are references to previous happenings, especially in their private lives, that make more sense if you’ve read previous novels). The book does a great job with pacing, ratcheting up the pace and tension as Duncan goes from slowly gathering evidence to starting to develop theories and pursuing the guilty with a vengeance.

Though my initial inclination was that the bombing was going to turn this into another book investigating terrorism – and they have their place, but I like the slightly more provincial feel of the previous Crombie novels – that is not ultimately the direction of the investigation. Duncan has to use his skills to dig into the personal lives of the protesters as he attempts to determine exactly what went wrong and why. He’s a wonderful investigator and inquisitor with plenty of personality and tact that make you understand how he’s able to dig up the information he does each and every time.

My only real quibble with this book – and I had the same one with the last Duncan Kincaid / Gemma James novel The Sound of Broken Glass – is that it leaves you hanging at the end. Though the crime may be solved, there is still a little something that is a mystery at the end of the book. In the last novel, it was an envelope left on Duncan’s desk where in this book, there is an implied threat that Duncan and Gemma will have to deal with.

Regardless, I thoroughly enjoyed it, as I have all Crombie’s novels, and I will eagerly be picking up the seventeenth installment in this series next year.

Written by Michelle of Honest & Truly! who never seems to solve the case correctly the first time. This is why she focuses on cooking on her blog Honest & Truly! instead of crime fighting. You can follow along with her on Twitter and other social media where she is @HonestAndTruly.

« Ripley’s Believe it or Not! Reality Shock
Pieces »