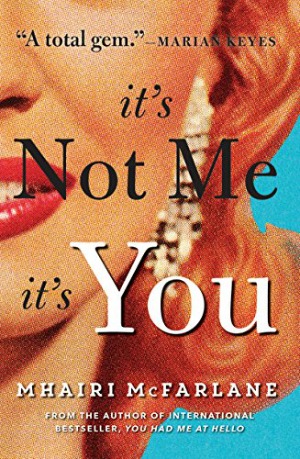 If you asked Delia Moss if she was happy at the onset of the novel It’s Not Me It’s You by Mhairi McFarlane, she would likely give you an immediate affirmative answer. She wouldn’t have to think too deeply about it, because of course she’s happy. She has a steady job, a fine place to live, a beloved dog, and a boyfriend of ten years. In fact, the story begins as Delia is preparing to propose to said boyfriend, a nontraditional action that fits with her own unique personal flair. The proposal plan is perfect and lovely, and Delia jumps right in with enthusiasm and joy.

And she’s met with a surprisingly cool and unenthusiastic response. A short time later that night, a text she spies on her boyfriend Paul’s phone reveals the reason he’s not excited as she. That’s when everything begins to crumble.

In novels with female protagonists making a discovery of an unfaithful partner, it’s really easy for the story to get fairly maudlin pretty quickly. In McFarlane’s hands, Delia may see some darkness, but maudlin is not her style. Even when she feels lost and adrift, her innate spunkiness keeps her from drowning. So, in classic reinvention mode, Delia leaves behind what she knew (in more than just her romantic life, as it turns out), and strikes out for a fresh start. Or maybe it’s just a temporary break from the norm to discover what she truly wants, she’s not quite sure. When Paul reacts with nothing but regret, apologies, and requests for another chance, it only adds more uncertainty to Delia’s resolve.

In addition to her love life troubles, two additional story lines take shape, both work-related and both mired in a bit of mystery. Mostly intertwined in the end, these additional plot lines take some wild zigzags throughout the book, making me predict a few possible different outcomes at times. What they all do consistently is help Delia figure out who she truly wants to be.

That’s where I think the title is perhaps a bit misleading, even as it’s trying to make light of a familiar refrain (and seems to be missing a requisite comma, but that could just be me). For Delia does need to discover things about herself that will help her to see her choices in all aspects of her life in a new light. By the end of the novel, (which at over 500 pages, comes in much longer than most contemporary fiction of this sort), Delia will see herself differently, becoming more fully the person she really wants to be.

I quite enjoyed escaping into Delia’s world, and though there is a lot going on at times in this novel– including a comic strip of Delia’s creation inspired by her life that pops up as drawings between chapters here and there– I was happy to go down the side streets and detours with the story. A welcome sense of humor was woven through the book, even as Delia was feeling her world fall apart. Lighthearted but lengthy, It’s Not Me It’s You makes for a delightful summer read.

We’re happy to be participating in the TLC Book Tour for It’s Not Me It’s You.

« Ruthless
The Truth About Twinkie Pie »