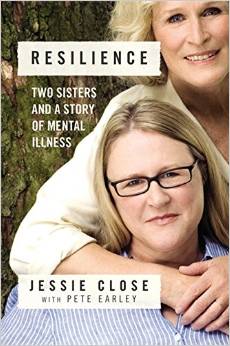 I have to admit that any time I think about labeling someone as “mentally ill,” it still evokes the stereotypical padded room, and isn’t that part of the problem? I have family members who have been diagnosed and treated for anxiety and depression, not to mention countless friends who have that same diagnosis, children or teens with depression, anxiety or ADHD, and so I know that it is an illness that benefits from treatment and can have disastrous consequences if left untreated, just like diabetes or an auto-immune disorder.

I am assuming that all of us have been affected by mental illness, if not personally, then peripherally. There are temporary cases of post-partum depression, stress-induced flare-ups, and those who struggle daily. Some hide it or function well with treatment and others feel like they struggle all the time. Jessie ran the gamut, and used alcohol, drugs and men to try to self-medicate, which of course made things worse. She heard voices, contemplated suicide, and laid on the couch for days on end, even when she had children depending on her.

When her teen son began showing clear signs of severe psychopathy, he was hospitalized. Hearing about her own struggle in her own words was powerful, but feeling the powerlessness of being a mother watching your child suffer and being unable to help him will resonate with any reader.

As the subtitle and book jacket indicate, it’s also a story about sisters, one very famous sister, Glenn Close. Jessie also shares an interesting perspective of being related to a very famous person whom she simply thinks of as Glennie. If you are a big fan of the actress, you might enjoy hearing about her early years and the wonderful way she supports her sister and other family members. Glenn shares a few vignettes throughout the book, but the story is really Jessie’s.

As mentioned, Jessie did experiment with the sex, drugs, and rock and roll lifestyle of the 70’s. She doesn’t gloss over it, and it’s certainly not romanticized, but it is a part of her story for those who may be sensitive to that subject matter.

It is definitely a difficult read, but it was so enlightening to me, and I know it help me understand those who struggle with mental illness. I love the title, Resilience, and even though it’s not a happy ending tied with a pretty little bow, it is ultimately a story of survival, a hard-fought win.

« Orchard House: How a Neglected Garden Taught One Family to Grow
Nobody’s Cuter Than You by Melanie Shankle »