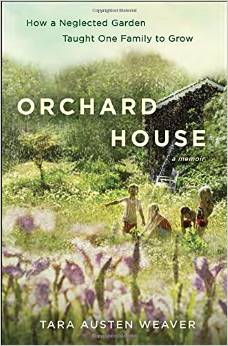 I read this book when I was in a bit of a reading slump, and this was just the ticket — a book I wanted to read that pulled me in with evocative writing, honesty about a tough life without turning maudlin, an interesting setting.

Orchard House: How a Neglected Garden Taught One Family to Grow is a memoir about a daughter’s relationship with her mother, strained because of her mother’s hardness borne from life as a hard-working single mother, yet still strong and alive. It’s about a sister’s relationship with a brother, one strained with resentment for having raised him and lost her own childhood, yet forging a new path in adulthood. It’s about a single woman, devoted to her nieces, and her search for community. And of course it’s about a garden.

When Tara’s mother moves from California to Seattle to be near her grandkids, she finds a house with a large yard and an overgrown orchard. Tara remembers living off the land as a young girl and loves the idea of her nieces having the same pleasure of fresh-picked fruit and hard work. She spends time there to help. Instead of just spending the summer in Seattle as planned, she ends up moving there herself. Is it the garden that calls to her? Her growing nieces? Her aging mother?

The story of the garden and the family each coming together in their own time was riveting, slow, lovely. The metaphor of growing a garden together and nurturing family bond is not at all forced and comes together beautifully. This is a memoir for people who love memoir.

« Inside the O’Briens
Resilience: Two Sisters and a Story of Mental Illness »