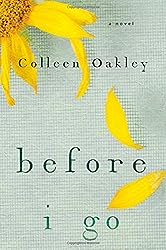 27-year-old Daisy has already beaten breast cancer once, and on the eve of her 4 year cancerversary, receives the worst possible news — her cancer is not only back, it has spread and the prognosis isn’t very good. As she comes to term with her dying, she also sets a goal: find her husband, Jack, a new wife.

Jack is a brilliant vet student, but his personal habits are a mess. He can’t cook and won’t clean up after himself, and Daisy fears he’ll fall apart without her. She enlists the help of her best friend, Kayleigh, frequenting popular singles hangouts and dating websites. Daisy thinks she has found the perfect woman, and then discovers that she and Jack already know each other.

Daisy pushes Jack away, not letting him come to doctor’s appointments or treatments, fearing he’ll perceive her as weak. But when Jack begins spending more time with Pamela (the perfect woman), Daisy fears she may be losing her husband, and realizes she needs him more than she thought.

Before I Go covers ground that’s been covered before, where a dying spouse finds a mate for the one who will be left behind, but author Colleen Oakley tells the story in a new way. I would have liked to see more from Jack’s side of the story, we don’t hear from him until the epilogue and getting his side would help understand his motivation and actions as he appears to be distant and uninterested. But ultimately the story is Daisy’s so it also makes sense to see Jack only from her point of view.

Before I Go is read by Rebecca Lowman, who has narrated other popular women’s fiction by authors such as Rainbow Rowell and Jodi Picoult. She brings heart and soul to this story but also does the humor quite well. The epilogue is read by Kirby Heyborne, and his narration of Jack and his life without Daisy is what finally brought me to tears.