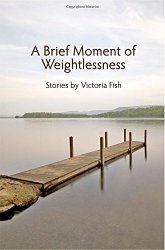 In A Brief Moment of Weightlessness

, author Victoria Fish takes us deep into everyday lives, into the thoughts and emotions of people facing various crises or developments, into the heads of children, the elderly, teens, mothers of grown children, and more. This collection of short stories deals with events as small as a girl dealing with her older sister’s adolescence, as momentous as a couple adjusting to life after an accident has left the husband missing a leg.

Fish’s genius lies in her ability to plunge her reader down into the depths of the psyche. Her writing is lyrical and lush with description. Each story begins in the middle, as it were, and it only becomes clear as the reader opens herself up to it.

In “The Sari,” a young woman spends a semester abroad in India shortly following the death of her mother, and she finds herself reeling from the loss and finding it makes culture shock all the more surreal. In “Where Do You Find a Turtle with No Legs” a young girl deals with her father being in jail by fixating on turtles and their survival. “If you see a turtle, move it out of harm’s way, Ranger Sandra had said. There was probably no such thing, she (Maddie) thought.” (p 14)

In the title story, young Frances is up at the lake with her older sister, parents, aunt, uncle and cousin. Her older sister is pushing boundaries and goes off with a couple of boys from a nearby camp while Frances panics. Driving her emotions are her parents’ marital problems, although she’s too young to entirely recognize that. As with all the stories, Fish provides a deep first-person view even when stories are told from the third person.

In “What is the Color Blue?” a woman named Claire adjusts to a new neighbour who blows hot and cold, who seems one moment to offer an enticing glimpse into an elegant world, and the next moment is sunk into a deep depression. This story seems uneventful at first, new neighbours in the country, a first-time pedicure for Claire, but gradually things swim into focus a bit more for Claire. And there are two stories about Adam, an Iraqi war vet who is estranged from his wife and child due to an unnamed event that is almost certainly some sort of PTSD.

The stories in A Brief Moment of Weightlessness

do not resolve easily. They end with people searching for connections, for meaningful interactions, yet before any sort of closure. At first that bothered me, but as I continued reading, I found myself relaxing into it. “The child won’t die; at least not yet,” I would tell myself. “They won’t divorce before this story ends.”

In the last story, elderly Martha is still in her own home thanks to her granddaughter’s organization and the home-care she pays for. But relations between grandmother and granddaughter are strained, until a visit and some impromptu Chinese food shows that the annoyance is a cover for genuine love and affection. Moments may be fleeting, but they are real. And that really sums up the book. Real people in real moments experiencing life. Fish’s characters speak truth, with voices that echo through the mind and heart. This is an extraordinary book, with characters so sharply drawn that they linger in your mind for days. Highly highly recommended.

One of you can win your own copy (U.S. and Canada addresses only)