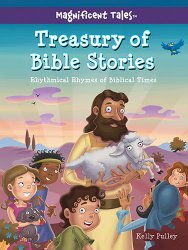 When my kids were younger, I was always on the look-out for good collections of Bible stories. I had the ones I liked, and there were some gifted to us that gradually found their way to a thrift store. I’m fussy–I like the stories to be accurate and the pictures to be good. (No blondes, for example. I have nothing against blondes; I am one myself and I am mum to 2 of them as well. But the ancient Middle East wasn’t overly populated with them.)

is a worthy new addition for those of you wanting to add some Bible knowledge to your kids’ lives. Author Kelly Pulley has taken many of most beloved tales from both Old and New Testaments and set them to rhyme, and added it a bit of humour that is sure to delight young readers. From “Tricked By a Snake: The Slippery Story of Adam and Eve” to “Daniel for Lunch: The Tasty Tale of Daniel in the Lions’ Den” to “Food for a Fish: The Whopping Story of Jonah and the Whale,” even the titles show a fun twist on the stories.

One thing that I really liked about it was the detail of the stories. So often, collections of stories tell only the most basic parts of the tale; in contrast, Treasury of Bible Stories

puts stories in context and goes beyond the basic outline. For example, the story of the walls of Jericho includes the background that the people have been wandering 40 years, and tells of Rahab, the crossing of the Jordan, and the strange appearance of the “man” (from Josh 5) before they actually start marching around the walls. The book also includes some of the parables, and the story of Jesus’ baptism, which doesn’t make it into many collections.

And no, there aren’t any blondes. The most American-looking people are actually on the cover. The illustrations are even a little humourous–Jesse has a bald spot, the men spying on Daniel to see if he’s praying are leaning over a wall and their eyebrows are most prominent, and the Roman soldiers outside Jesus’ empty tomb are covering their eyes and gritting their teeth, to give just a few examples.

The rhymes are sometimes reminiscent of Dr Seuss in their meter. In fact, this is the only thing that bothered me. From verse to verse within a story, the meter and sense of timing would change, and I found that jarring. However, that’s a very small issue, and quite possibly most people wouldn’t even notice.

All in all, Treasury of Bible Stories

is sure to be enjoyed by a new generation of young readers and their parents.