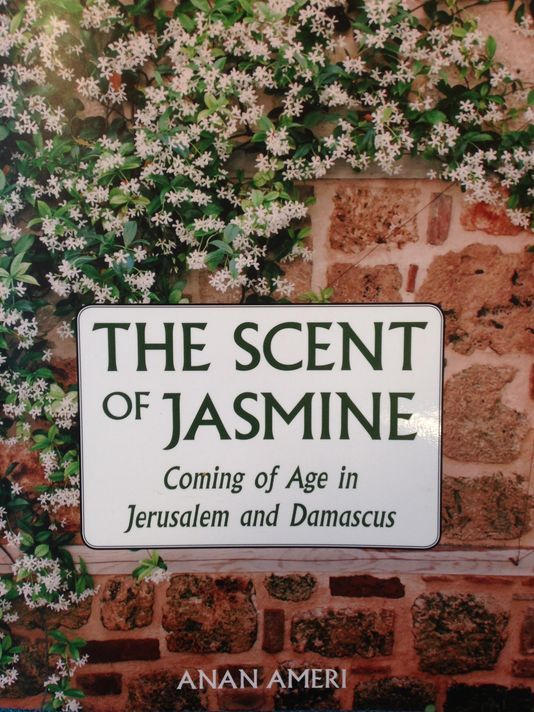 Anan Ameri was born in 1944 to a Palestinian father and Syrian mother, and she grew up primarily in Amman, Jordan, and Damascus, Syria, dividing her childhood between life with her parents in Jordan and summers as well as extended periods in her grandfather’s home in Syria. She came of age in a time of great political upheaval, and as an adolescent and young adult had passionate opinions that carried her into demonstrations and political statements. Her earliest memories involve being carted off to her maternal grandparents to escape the 1948 war which established the modern state of Israel and plunged millions of Palestinians into a homelessness and statelessness that continues to this day. However, although all this plays out in the background, she has written a memoir that revolves around memories of everyday childhood. Composed of vignettes that give glimpses into her life and that of her family, The Scent of Jasmine tells tales that evoke beloved aunties, pet goats, long dusty car rides; later tales involve marching in protests and having to dodge her way home to hide her activities from her parents, going off to college in Beirut, in a city she loved and at a college she hated, and her evolving relationship with her father. Taken together, the book presents a glimpse into a way of life, a way of families, of a specific time and place.

The book is a series of short stories revolving around specific times or events. For example, the first story is of the events of 1948, when she and her sister were put into a taxi and sent to her mother’s childhood home in Damascus for the duration of the war. Her primary emotion on losing her home was worry about the absence of her parents (she answered every doorbell, hoping it was them) and the loss of her beloved puppies. Her parents were modern people; for example, her father took the name of his oldest child, a girl, instead of taking the name of his first son as is common in the Arab world. Educating their children, including graduate degrees, was of utmost importance to them, and they refused to admit any possibility that precluded that. However, religion was of less importance–it wasn’t until Anan was at college in Beirut that she was confronted with the question, and had to call her mother in Amman to ask, “Are we Sunni or Shi’a?” Her time at with her mother’s family provided more of a glimpse into a traditional religious household, and she vividly recounts religious rituals performed to make special requests.

I enjoyed this book. I have a lot of Iraqi and Syrian friends, and much of this book felt a little familiar, while allowing me a deeper look into Arab culture. It’s also informative in giving a picture of a particular time and place.

« Reading with Patrick
The Losers Club by Andrew Clements »