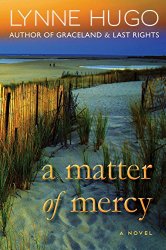 Caroline Markham’s life is a wreck. Years earlier, after a fight with her husband, she drove drunk and smashed into a parked car, killing a child and badly injuring his mother. She spent time in jail, lost her job as a elementary teacher. Now she’s reluctantly moved back home to care for her dying mother, recognizing that she’s soon to be all alone in the world.

Her mother’s home is situated in Wellfleet Harbour, Massachusetts, at the edge of a horseshoe-shaped bay. From the living room windows, Caroline has a view of the aquaculturists–the men who work the grants at low tide, picking oysters and clams, managing things so that they can eke out a living and even make a profit some years. One fateful night as a hurricane brushes against the land, Caroline goes out to help Ridley Neal, a old high school classmate, and he ends up spending the night.

Although they get on well at their first encounter, Caroline and Ridley go a long time before achieving even civility again. They each keep misunderstanding the other, which leads to more and more anger and heartbreak. Each additionally is dealing with their own crises. Caroline’s mother dies, and while still reeling with grief she runs into the woman she injured and whose son she killed. Ridley and 2 others get sued by a wealthy landowner, a “washashore” who only inhabits his house on weekends, because their work at low tide threatens the man’s view of the bay. The 3 of the working-class men run the risk of losing everything. Only basic communication and trust, along with forgiveness and mercy can get them all out of their respective messes–but can it be forthcoming?

A Matter of Mercy

does a good job of creating a world that revolves around the tides, and the men who work the seas, uncomfortable in a lawyer’s office, used to settling things with fists or rough words. It takes us into the loss of parents, the grief and loneliness of being left alone in the world. The characters felt real enough that there were lots of times I got annoyed at the the two main ones, especially Caroline, who ends up practically stalking the mother whose world she destroyed that one night when she missed a tight curve in the road. At times it feels like she and Ridley are intentionally misunderstanding each other.

A Matter of Mercy

doesn’t wrap up neatly in the end, but that there is a clear sense of the directions in which things are moving, which I appreciated. (I mistrust books with too-perfect endings) Although Caroline and Ridley still have plenty to sort through, there’s a sense of the rhythms of life, and that these two were made for each other. In the end, this is a book about redemption from past choices and mistakes, a book of hope. (That may be a bit of a spoiler, but you’d probably figured that out from the title anyway.)

This post is part of TLC Book Tours. See the complete schedule here.

« Monkey Me books 3 and 4
Madame Picasso with #Giveaway #MadamePicasso »