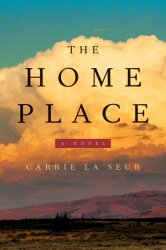 In The Home Place by Carrie La Seur, complex family relationships and a harsh, rural Montana setting await Alma Terrebonne upon her return home for the first time in several years. Unfortunately, the trip is due to the death of her younger sister, a happening that has the potential to become another piece of slightly mysterious family history. When Alma leaves Seattle, it doesn’t take long for her to be drawn back in to the ways of her hometown, and it becomes imperative to her to find out the truth behind her sister’s death. As readers can imagine, Alma ends up facing more than she had bargained for.

The idea of “getting out” is one with which many folks who grew up in small towns can relate. It represents an accomplishment of the few, and Alma strove for it after the death of her parents during her high school years. Leaving the others behind was as much an act of self-preservation as it was a defiance in the face of loss. But even in the city, Alma still feels a longing for the open skies of Montana, and the comfort in that space she immediately feels upon her return fills her at the same time as it scares her.

In trying to fill in the details of her sister’s death, Alma comes to learn the full extent of her sister’s difficult life, along with secrets that had been buried deep over the years. She feels responsible for the safe placement of her niece, though the remaining family members are limited in their abilities to care for her. In addition, returning to her family’s “home place” brings her right back in contact with the love she left behind when she left Montana behind. She must decide how to proceed– and if her future can include any reminders from the past.

Part crime mystery and part family drama with a bit of romance thrown in, this novel weaves an interesting story, and the rural Montana backdrop is powerfully rendered, in both harshness and beauty. Though I wasn’t as drawn in as I had hoped, I imagine that many readers will enjoy the suspense aspect around both the death of Alma’s sister and the dynamics of the relationships in the Terrebonne family.

« The Never Never Sisters, a 5-Star Read
The House We Grew Up In by Lisa Jewell #Giveaway »