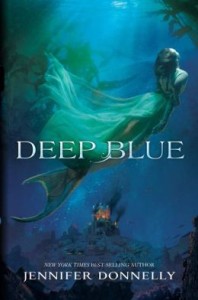 I frequently enjoy YA books, as they may be meant for teenagers but still appeal to the kid in me, too. Deep Blue by Jennifer Donnelly felt more like a book that needs a teenage girl to truly appreciate it. This first book in the Waterfire series is set under the ocean and features the world of mermaids.

Serafina is the princess of Miromara, and she is getting ready to celebrate her Dokimi, which is a series of tests that prove that she is ready to take on the mantle of ruler one day once her mother dies – as this is a matrilineal society and the men don’t rule. It is also when her betrothal to a prince from another kingdom will become official.

In the middle of the Dokimi, there is an attack where Serafina’s mother and father are both targeted, and her father is killed while her mother is severely wounded (and we assume killed, though Serafina resists accepting this possibility). Serafina and her best friend Neela, conveniently the sister to her soon-to-be-bethrothed, manage to escape the castle and the city of Miromara in the hopes of finding someone to come rescue them.

The story is a tale of growing up with Serafina forced to accept that she has the talent and the skills to lead, much as she doesn’t wish to. Everything that points to Serafina as a leader is another admission that her mother may not have survived the attack. The world Donnelly creates is lush and incredibly detailed, and she spends a great deal of time explaining and describing it. The language has a definite teen feel, with frequent references to “Hey, Merl!” (Hey, Girl!) and how someone is a “wrasse-hole” (fill in the blank, as wrasse is used in various contexts throughout the book).

I felt like I didn’t understand where the book was going for much of it, which led to some frustration on my part. It felt like it should move faster and do a better job of clarifying the plot – and then a whole crush of backstory and detail would come in that didn’t quite fit what I was hoping for. Once I got near the end, I realized that this was designed to be a series and that not all would be revealed in this book, which made it much easier to read.

The last 50 or so pages were the most enjoyable of the book, whether that’s because I finally accepted what the book was, the author finally hit her stride, or I had enough background finally to feel like I had a compass to follow, I’m not sure. Were I 20 years younger, I can see myself enjoying this a lot more, as it is a fun book with strong characters, though I’d like to see them developed more. It’s a quick read, and the ending gave me hope that the series is looking up and will bring me back into the story to follow the next stage in the girls’ search to rescue their homelands.

Written by Michelle who would love to have some of the magic these mermaids do. See how she copes without any on her blog Honest & Truly! and follow along with her on Twitter where she is also @HonestAndTruly.

« Margarita Wednesdays: Making a New Life by the Mexican Sea
The Mark of the Midnight Manzanilla #Giveaway »