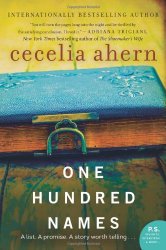 Kitty Logan’s life is in turmoil. First of all, she messed up professionally and very publicly, after airing a story accusing an innocent teacher of being a pedophile. As a result, her television program is being sued and her job in print media is in jeopardy too, as advertisers are wary of being involved in anything associated with her. Thanks to public anger, she has become the target of a series of hate attacks, and every time she returns to her apartment she finds it decorated anew with manure, spray painted insults, or something equally unpleasant. On top of everything, Kitty’s best friend, mentor and editor, Constance Dubois, is dying of cancer.

After Constance’s death, Kitty is at a loose end. She’s filled with self-doubts but, worse, so are her editors. As the staff of the magazine Constance founded debate on the best way to honour her memory, Kitty knows she has to be the one to write the story that Constance left undone.

Constance left a list of 100 names, but Kitty is at a loss as to what connects them, what the story is, or even how to contact them. She begins by going through the phone book but is soon stymied by the sheer impossibility of the task. She eventually finds a phonebook at Constance’s with all the names and addresses marked, and begins to make contact. But no one has even heard of Constance.

Undeterred, Kitty begins trying to talk to people whose names are on the list. She visits Bridget, an 84 year old woman in a home, and meets Mary-Jo, whose friend fake-proposes to her in public every week and garners them free congratulatory drinks in the process. She tracks down Archie, who lives in a bad area, and finds Ambrose, who runs a butterfly farm and museum. But she can find no connection between them, and a deadline accompanied by a doubtful editor is breathing down her neck.

is the story of a woman trying to rebuild her life from the ashes. It’s a tale of learning who she can trust and who she shouldn’t, of learning to take chances again and to learn once again to trust and follow her journalistic instincts.

As Kitty plods along trying to figure out what on earth Constance intended to do with this list of names, she begins to see life anew. By the time she figures out her angle, her own personal story has taken some unexpected twists and turns. One Hundred Names

is the perfect summer read–intelligent enough to stimulate your imagination but a simple, fun read as well.