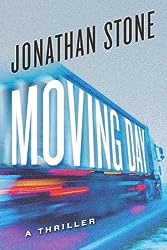 At 72, Stanley Peke’s memory isn’t what it used to be. So when the movers who will be relocating his possessions across the country show up a day early, he thinks he wrote down the wrong date, and is too embarrassed to question it. It’s not until the next morning when the doorbell rings that he discovers he and his wife, Rose, are the victims of a scam. Being robbed of everything he owns brings back long-repressed memories of his childhood in Poland, hiding in barns and fields to avoid being discovered by the Nazis.

Peke decides he wants his things back. It’s not the items themselves, which are, after all, just things. Having lost everything once before, and working hard for the life he has, he just wants what’s his. Through the use of a GPS tracking device hidden in a watch in his safe-deposit box, he tracks the thief to his hideout deep in the Montana woods, kicking off a series of events that force him to face his past in ways he never imagined.

Moving Day is a thriller, but it’s not a fast-paced, edge-of-your-seat kind of book, at least initially. There’s a lot of introspection, decisions made, plans set in motion. The story alternates between Peke and the thief, who not only feels no remorse for what he has done to hard-working elderly people, but is proud of the scheme he’s run successfully dozens of times. The more successful he is, the more sure he is he won’t get caught, and he underestimates Peke, making mistakes that only serve to anger him. The pace does pick up with the cat-and-mouse game between Peke and the thief, both intelligent and resourceful men with more in common than either one would care to admit.

Peke is referred to as a World War II survivor, but in what capacity he survived is not clear until late in the book. Even Rose does not know the details of his childhood in Poland and the things he did to survive.

The writing style of Moving Day lends more to the literary fiction genre than thriller, and there were times I wished the pace would pick up a bit, but I enjoyed the story and recommend it.

Thanks to TLC Book Tours we have one copy to give away (U.S. only). Follow the instructions in the widget below to earn one entry or more.

Entry-Form
« What’s on Your Nightstand, May 27
Love and Other Foreign Words, a 5-Star Read »