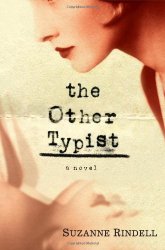 Rose Baker is an upright, prudish young woman who works as a typist in a police precinct in 1920s New York, where she fastidiously types out even the most sordid confessions.

One day, a new typist arrives at the office, trailing clouds of glamour in her wake. Odalie Lazare is everything Rose isn’t–daring, alluring, tempestuous, stunning, modern, rich. She takes Rose under her wing. Rose moves into her luxurious suite at a hotel and begins to dress in Odalie’s latest fashions, and visit speakeasies with a little of Odalie’s daring.

Odalie remains something of a mystery, however. It’s unclear where exactly she’s from, or where she gets her money. Various stories are suggested–a rich Hungarian count, a California childhood. Rumours abound, pinning her as a gangster’s moll or a female bootlegger. She floats through her days, charming friend and foe alike, and Rose follows, bedazzled. It’s pretty clear from early on that things will not end well.

Read my full review of The Other Typist at 5 Minutes for Mom where you can enter to win your own copy.

« The Dirty Book Murder: A Rare Book Mystery #Giveaway
I Love My Little ….. by Karen Alpert »