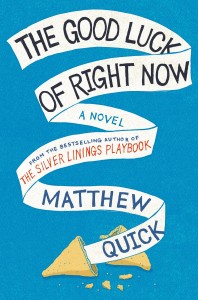 Matthew Quick is best known for his novel The Silver Linings Playbook that became the incredible award-winning film of the same name. His young adult novel from last fall, Forgive Me, Leonard Peacock (linked to Jennifer’s review), garnered much attention as well, and was shocking and emotionally intense. His newest novel, The Good Luck of Right Now, fits right in with his others, filled with quirky characters, uncomfortable situations, and honest depictions of the beautiful– and not so beautiful– intricacies of human relationships.

I can’t help but share the beginning of the book description, for not only does it give a concise character snapshot, it also captures the tone and voice of the novel itself:

For thirty-eight years, Bartholomew Neil has lived with his mother. When she gets sick and dies, he has no idea how to be on his own. His redheaded grief counselor, Wendy, says he needs to find his flock and leave the nest. But how does a man whose whole life has been grounded in his mom, Saturday mass, and the library learn how to fly?

Shortly after his mom’s death, Bartholomew comes across a “Free Tibet” letter among his mother’s personal items, a publicity piece written by Richard Gere in his campaign to raise awareness. His mother had long adored Richard Gere, and late in her illness, she even took to addressing her son as Richard. Bartholomew believes this must have a deeper meaning, a sign of a connection between him and the actor. In her final days, Bartholomew indulged her and pretended to be Richard Gere, finding a previously unknown level of confidence. Now that she is gone, Bartholomew is writing letters to Richard Gere, sharing the story of his life- slowly losing his mother to brain cancer, living with the “tiny angry man” inside his stomach who harshly critiques his every move, trying to please his new therapist as she tries to help him work through his grief, and maintaining a friendship with the parish priest who has always been a part of his life and who is having a difficult time following his mother’s death.

These letters comprise the novel, and with Bartholomew as the narrator of his own story, his perspective is not only unique, but undeniably touching. Bartholomew never labels himself with a specific diagnosis, but it is clear that he has struggled his entire life with the differences that manifest themselves in his learning style and social interactions. Without a particular label, it’s easier to see Bartholomew as a dynamic character rather than one boxed into a certain set of symptoms.

After taking in a couple of Matthew Quick’s previous works through both novel and film, as I finished this one, all I could wonder was, what is it like in Matthew Quick’s head? He writes characters with mental illness, traumatic pasts, and “quirks” so believably that I imagine it must be a wild place in his mind. There is so much to like in this novel, from a nontraditional and immediately engaging format to a protagonist who charms with his unfiltered honesty and vulnerability. Yes, these pages are full of pain, but there is also an impressive amount of acceptance and hope, too. Somehow this character retains an innocence that belies his differences from typical adults, while also demonstrating himself to be wise and perceptive, especially about human relationships. Quick’s other characters- a bipolar priest at a low point, an extremely reserved young woman who asserts she was abducted by aliens, and her incessantly-foul-mouthed brother who is struggling to deal with the loss of his beloved cat- are like no others, truly, but they still manage to shed light on qualities of what it means to be human, even for all their extreme uniqueness.

Follow the instructions in the widget below to enter to win one copy of this unforgettable novel. Contest open to U.S. residents.