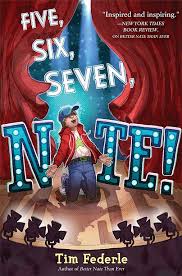 Nate is a lovable misfit whose honest voice in Better Nate Than Ever earned him a huge following (or at least a loyal one).

This sequel, Five, Six, Seven, Nate!, begins where Better Nate Than Ever left off. Stop reading now if you don’t want spoilers of the first book, but click through the link and read my review of that one because I’m still recommending it all the time.

For those of you who did enjoy the first book–

Nate is cast in E.T. the Musical because of his unique and spirited audition. This novel gives readers a cool insider’s look at what it takes to get a show off the ground, and in particular what the life of kid actors looks like backstage.

Whereas I thought the first book would appeal to anyone who felt like an outsider — as many of us do at different points in our life — and as theater-loving Nate did in his Pittsburgh hometown, this one probably has a more narrow focus of theater-lovers, or at least those who aren’t averse to awesome stories told through song and dance.

Nate’s humor, spirit, and honesty are still what carry the book, regardless of plot. The first book had him breaking free of all the haters in Pittsburgh, and the readers cheered along with him as he fought to see if he could really follow his dreams. His time in NY with the theater crowd had him thinking about his sexuality in a different way. In the first book it was sort of left in the air, but there’s no ambiguity here, so it might be something parents want to discuss.

This is the best kind of middle-grade fiction, because it’s a story that encourages us all to dream and to believe. Stretching the realm of what is truly logical is one reason I enjoy reading middle grade fiction, and this book has that in spades.

(No disclosure because I bought this book with my own cold, hard cash.)

« Why Are You So Sad?
My Best Non-Fiction Reads, What Are Yours? {On Reading} »