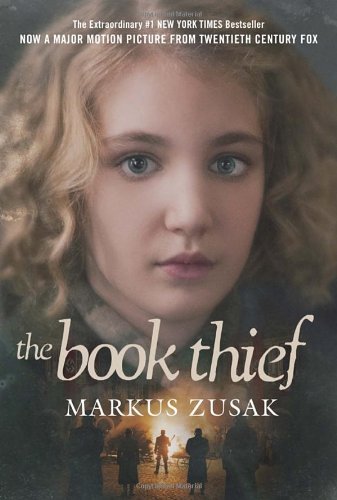 I attended a press trip to NYC for The Book Thief movie, paid for by Twentieth Century Fox.

The Book Thief is one of those books about which people (book bloggers and booklovers in particular) gush. It was on my list to read, and that was confirmed each time someone else read and loved it. One of our former contributors Lisa reviewed The Book Thief almost 4 years ago here on the site, giving it 5-Stars, and always talked about it as one of her favorite books.

In my materials for the phone interview I got to do with the author, I read that it’s been on the NYT Bestseller list for 300 weeks. Years ago, I saw it sitting on a shelf at a discount, so I bought it. But bringing it home and putting it on my shelf did not equate to actually reading it. Yes, I read a lot, but books that I think I want to read are generally pushed aside for the new shiny books that come in to be reviewed.

When it was one of the choices in my daughter’s independent reading unit a couple of years ago, she read it, so buying it came in handy, and her enjoyment of it reminded me that I still wanted to read it. But it still sat there on the shelf. When I got an email inviting me to participate in a conference call with the author, which was held in conjunction with the upcoming release of The Book Thief movie, I picked it up and started it that day.

The writing. It’s all about the writing. The story is incredible, too. It’s original, a holocaust story, which is common, but this one has the unique twist of focusing more on those left behind, parents of those who have been sent to war, townspeople who are going hungry, Germans who don’t necessarily support Hitler.

In my interview with Markus Zusak, someone asked him how this book has and how the movie will add to the canon of holocaust stories. I’ve thought of his answer a lot.

There weren’t a whole lot of books and documentaries and things like that that really focused on the everyday of certain German people or communities. Those are the stories I grew up on, where, for better or worse, too, that kids still had childhoods, that idea of just a childhood as well. Those were a lot of the stories my mom and dad told me.

Then the idea of the German people who didn’t want to fly the Nazi flag, which my mom’s foster father didn’t want to do or my dad himself when he was a kid. He was forced to go to the Hitler Youth, and he didn’t really want to because he thought it was boring, so he went to the river and threw rocks in the water just for the whole time that he should’ve been at Hitler Youth.

I will be posting much more here and at 5 Minutes for Mom in the weeks leading up to the Nov. 8 limited release, Nov. 15 wide. Please stay tuned for more from my phone interview with Markus Zusak, and roundtable interviews from a Twentieth-Century Fox sponsored trip where I was able to talk with: director Brian Percival and producer Karen Rosenthal, the actors who played Hans, Rosa and Liesel: Geoffrey Rush, Emily Watson, and Sophie Nélisse, as well as see an early full screening of the movie.

I can’t watch this preview with an introduction from the actress who plays Liesel, Sophie Nélisse, without getting a lump in my throat. I’ve actually seen the movie, and loved it. In fact, it was the movie, more than the book for some reason, that drove home the theme about the power of words.

I am usually a little annoyed by “movie tie in” books, but I decided to feature that image above because the movie resonated with me so much. The story is about Liesel, so it seems right to feature her on the cover. Actually, when we interviewed Sophie, she had read part of the book when she was auditioning, but when she got cast, she stopped reading (presumably wanting to be able to follow the director). But she did read it after she filmed, and said it was really strange reading about herself, picturing herself as Liesel. That’s not a problem most of us have.

I am happy to be able to offer one of you a copy of the book. If you’ve never read it, read it. If you just need your own copy, go ahead and enter. If you want to be able to put this amazing book in the hands of someone else, enter on their behalf. Just start off by entering your name and email address in the box below.

While you’re waiting on the movie

The Book Thief opens November 8 in selected markets, with a wide release on November 15.

« The English Girl
To reread or not to reread, that is the question {On Reading} »