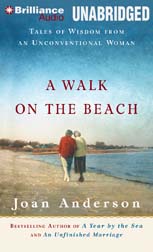 Early this year, I was visiting a friend and plucked A Year by the Sea: Thoughts of an Unfinished Woman off her bookshelf. I had heard of Joan Anderson at some point, so I picked up this slim memoir about an empty nester who took a year-long break from her husband and her home to live in her small vacation home in Cape Cod for some self-discovery. It was an interesting journey that most of us will never take. I wouldn’t want to, but I enjoyed reading about it.

When I saw that Brilliance Audio had released both that book and the follow-up, A Walk on the Beach: Tales of Wisdom from an Unconventional Woman, I jumped at it. This isn’t a sequel, but rather a parallel book dealing with a different theme, that of her friendship with Joan Erickson, covering roughly the same period of time (though going a bit further past that first year).

One would not have had to read A Year by the Sea, but I would recommend it, though the story in A Walk on the Beach of women’s friendship and mentoring might be more universally appreciated.

Joan Anderson met Joan Erickson during a walk on the beach. The “unconventional woman” was easy to spot on the foggy day, wearing her black cape. The two Joans hit it off right away, and Erickson quickly became a confidant and a sort of guide for Anderson as she continued to examine her past and plot out her future. Though decades older, 90-year-old Erikson taught Anderson much about living with excitement and joy.

In addition to the importance of friendship and mentors, A Walk on the Beach takes a look at aging — into middle age for Anderson and the end of life for Erikson and her husband who is living in a nursing home — and the important role that creativity adds to a life well lived.

Reader Laural Merlington did a fantastic job voicing both Joans. Audio memoir done well always works well for me. Though I read the first book (with my eyes), I can recommend both of the audio versions as a great way to follow Joan Anderson’s unconventional journey. Listen to a sample at the Brilliance Audio site.

« The Death of Bees {Review and Giveaway}
The Lawgiver »